The Washington-based World Bank, which has long presented itself as the foremost multilateral development agency, announced last week that it was discontinuing Doing Business, an annual report that for the past 18 years graded and ranked countries according to whether their regulatory or tax regimes were sufficiently pro-business.

This flagship report proffered policy advice generally consisting of weakening or eliminating regulations or procedures that put costs or obligations on private business, including corporate taxes or contributions to workers’ pensions or healthcare. Both the Bank and the International Monetary Fund have used the report’s indicators to pressure countries to reduce regulations, sometimes through loan conditions.

Not surprisingly, over almost two decades of existence DB provoked strong criticism from organizations advocating improved social protection and fairer taxes, groups calling for more equitable development policies in low-income countries, and the global labor movement. The World Bank early in the last decade made a concession to those opposed to the Bank’s advocacy of lower minimum wages and reduced protection for workers by suspending and more recently eliminating the DB indicator that called for weakened labor regulations.

But with the growing intensity of the movement in favor of policies that more fairly distribute wealth and income, there has been a ratcheting-up of opposition to DB in light of the Bank’s obstinate refusal to, for example, get rid of the report’s tax indicator, which routinely gave its best performer scores to tax havens and oil states. Through Doing Business the World Bank placed itself in overt opposition to a recent international agreement calling for higher taxes on corporate profits.

It was not DB’s unpopular right-wing agenda that finally led the World Bank to pull the plug on its most high-profile report, but rather the Bank’s revelation last week that officials at the highest level had connived to alter DB’s findings in attempts to please governments of some powerful and rich countries. Those implicated include the current head of the Bank’s sister institution, the IMF, Kristalina Georgieva, for acts that occurred in 2017-2019 when she was the Bank’s chief executive (a position that was eliminated when she left the Bank).

The incidents described in the Bank’s investigative report include an elaborate operation, led by Georgieva, to change data and improve the results for China in the DB 2018 report, the drafting of which coincided with negotiations to increase the World Bank’s capital base. The Bank was counting on a substantial financial contribution from China as a result of these negotiations.

A later incident related in the Bank’s investigation concerned an official named Simeon Djankov, a Bulgarian compatriot of Georgieva’s who happened to be a founder of DB whom she brought in to authorize changes to the report and subsequently promoted to be head of the Bank’s large economics department. In January 2019 Djankov travelled to Saudi Arabia where he delivered a speech promising that the country “would see significant gains in its Doing Business performance” as a result of having paid the Bank substantial fees to deliver so-called Reimbursable Advisory Services. In September of that year DB staff did in fact alter data to improve Saudi Arabia’s score in DB 2020 as instructed by Djankov, according to the Bank’s investigation.

This latest data-tampering scandal involving Doing Business is not the first. In late 2017, the Bank’s chief economist, Paul Romer, publicly apologized for “unjust” changes to DB methodology that made Chile appear to be a worse performer when the Socialist Party was in power than when the conservatives ruled, even though no significant regulatory changes had taken place. Romer speculated that Chile’s changed DB status was “politically motivated.” Georgieva responded in January 2018 by quickly terminating Romer (who later that year was awarded the Nobel prize in economics) and giving his responsibilities to Djankov. The latter’s first task was to prepare and issue what, under Djankov’s direction, became a highly retrograde World Development Report on the future of work. His other major responsibility was to take over control of DB.

The World Bank never conceded Romer’s conjectures about political bias against progressive governments as a motive for changes to DB methodology, but its acknowledgement last week that Bank officials introduced a pay-to-play ethic through Doing Business must have been a major embarrassment for an institution that, not long ago, made the rooting out of corruption in developing countries one of its principal goals.

For her part Georgieva, who has been head of IMF since November 2019, initially brushed off the Bank’s investigation, saying in a three-line statement that she “fundamentally” disagreed with it. One day later she insisted during a virtual meeting with IMF staff that all she did was ask Bank staff to “double-check, triple-check” the data for China to ensure that they were accurate. It appears that no one at the meeting was given the opportunity to ask whether she exercised the same degree of precaution with DB data for the 189 other countries covered by the report, none of which was in the position of potentially making a large capital contribution to the Bank.

It is doubtful that most people will find convincing Georgieva’s breezy dismissal of the misdeeds documented in the Bank’s investigative report. An asset manager quoted in an AP article observed that if officials at a private bank or rating agency had doctored a ratings report as the World Bank officials are alleged to have, “they would be fired and would be subject to regulatory investigation”.

The fact that one of the key players engaged in the manipulation has since left the Bank and become head of the IMF calls for even more vigilance, not less. The IMF has itself been an avid user and promoter of DB and its deregulatory agenda over the past two decades and Fund officials have shown themselves to be world-class pros in concocting distorted analyses to justify predetermined policy plans.

A prime example is “Fostering Growth in Europe Now,” a report the IMF used to justify its endorsement of the European center-right’s offensive against unemployment benefits, minimum wages, and other labor regulations at a time when Europe had not yet emerged from the global financial crisis and austerity policies reigned. The findings showed that labor market issues were only minor compared to obstacles to growth such as non-functioning credit markets and outmoded infrastructure, but the report nevertheless put calls for labor market deregulation at the top of the list in almost all of the 17 countries considered. The results of the anti-worker offensive combined with fiscal austerity were not long in coming: Europe entered into a double-dip recession, unemployment rocketed to over 20 percent in some countries, and living standards declined for most of those who still had a job.

The Doing Business data-fudging scandal allowed the Bank to shut down a festering embarrassment while avoiding having to address fundamental flaws in the economic policy advice they and the Fund have been pushing in countries around the world. In fact, current World Bank leaders may privately be grateful that ethics investigators shifted the focus from policy to personality flaws. The report describes Djankov as a “bully” who managed by “terror and intimidation,” was “pompous and undiplomatic,” and prone to lie. (It remains to be seen whether the Bank’s enumeration of his multiple talents earns him a promotion at the private-equity-funded Peterson Institute for International Economics where he currently works.)

In its statement announcing the end of Doing Business, the Bank asserted that “it remains firmly committed to advancing the role of the private sector in development and providing support to governments to design the regulatory environment that supports this.” If that means reviving the report under a new title and less ethically challenged leadership but with the same anti-business-tax and anti-regulation agenda, the IMF and World Bank will continue to contribute to policies that worsen inequality around the world.

By Peter Bakvis for Inequality 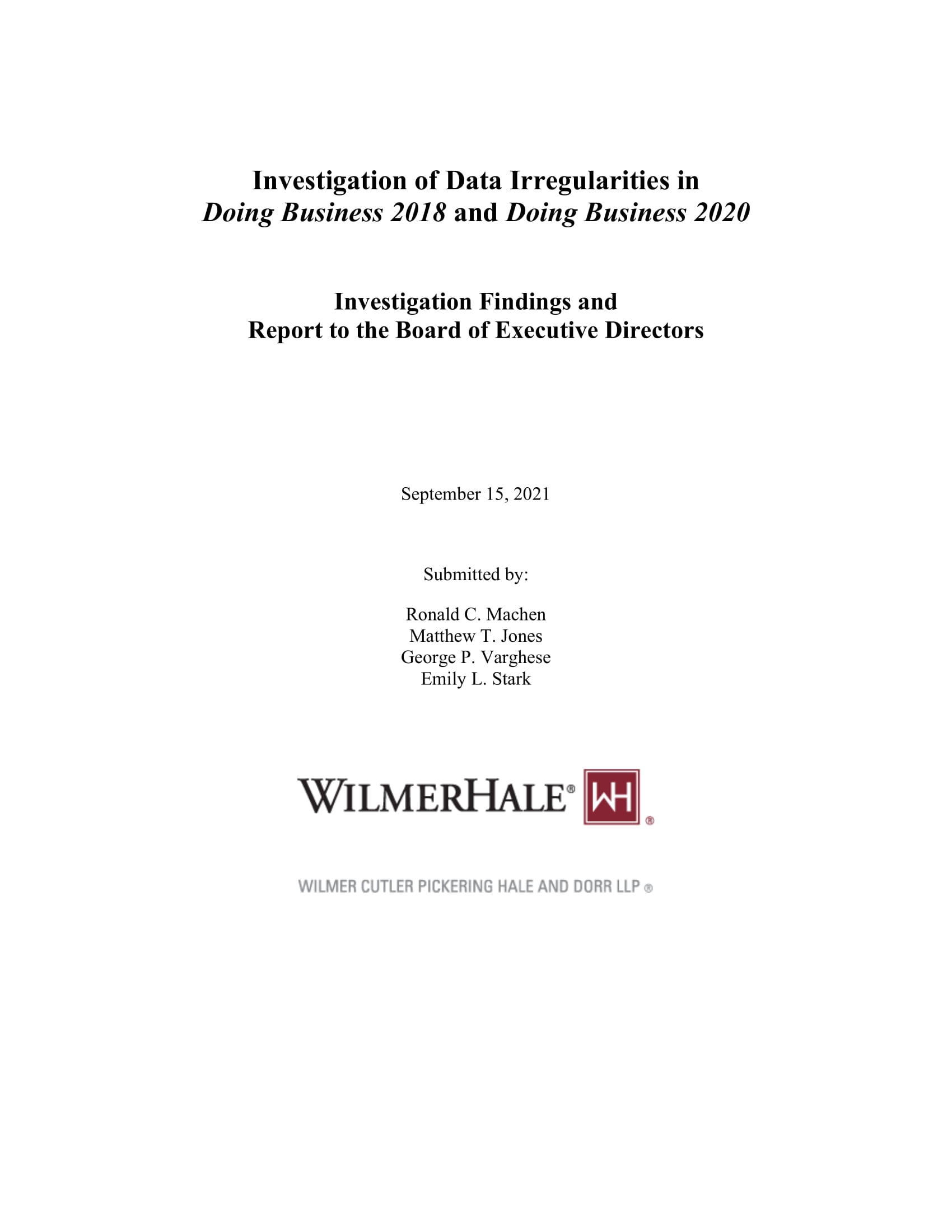 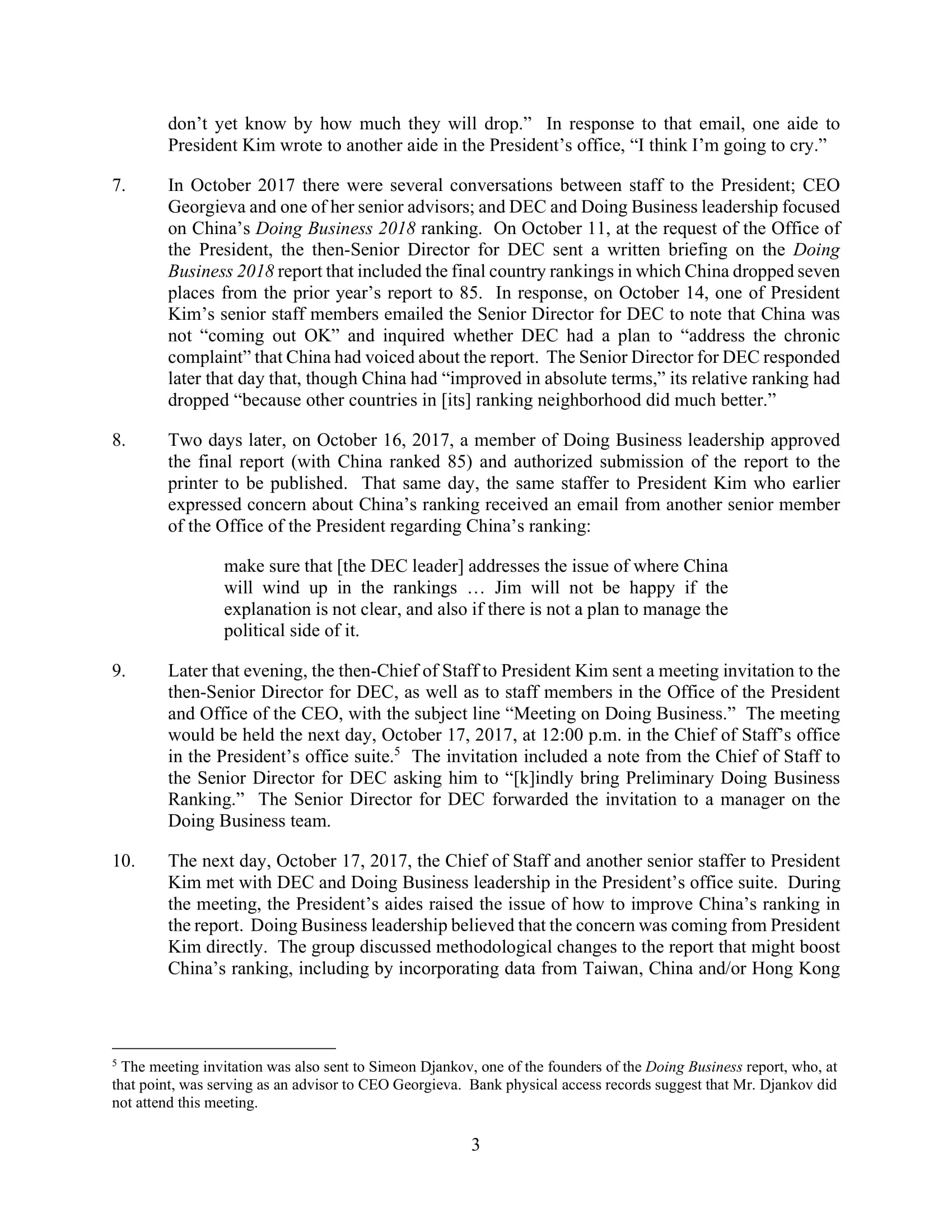 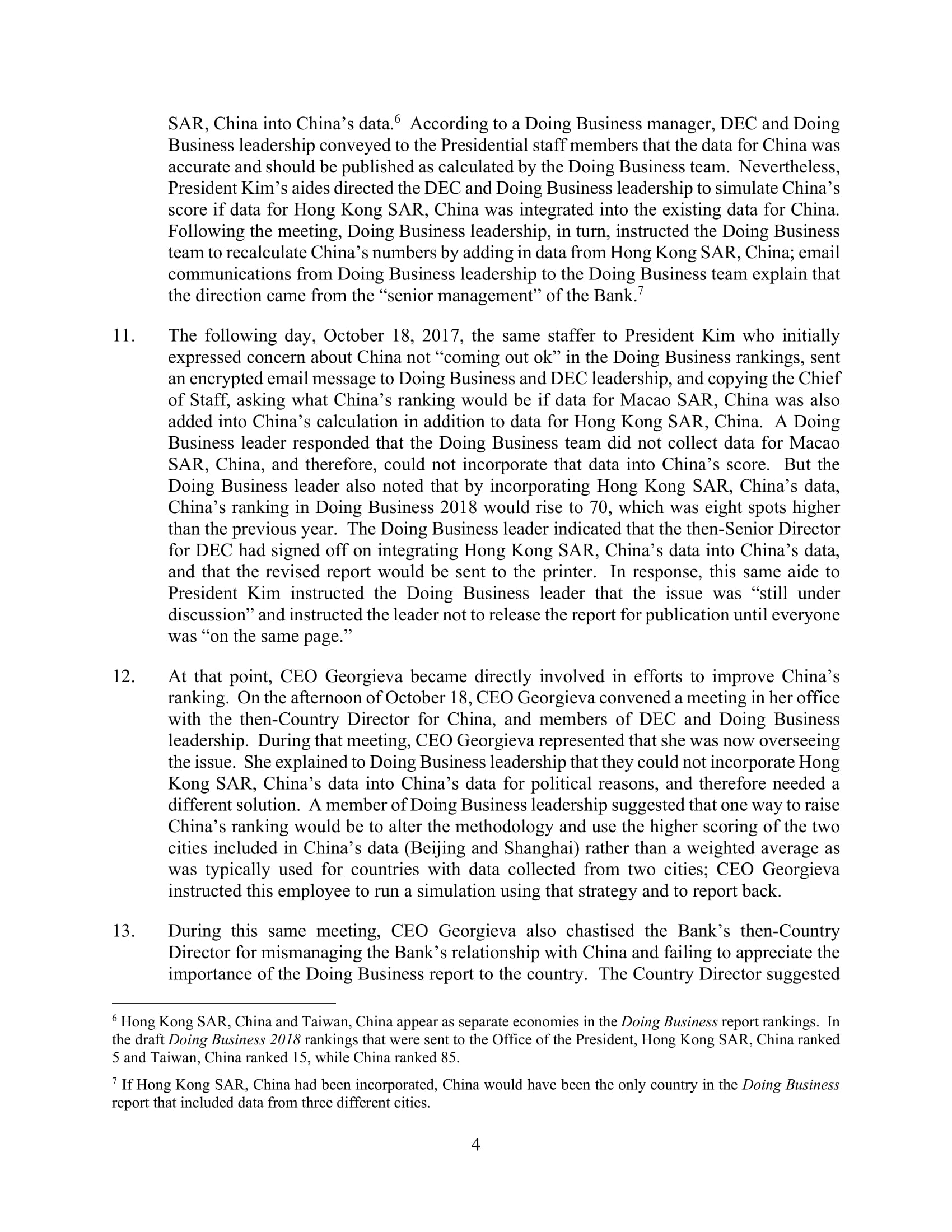 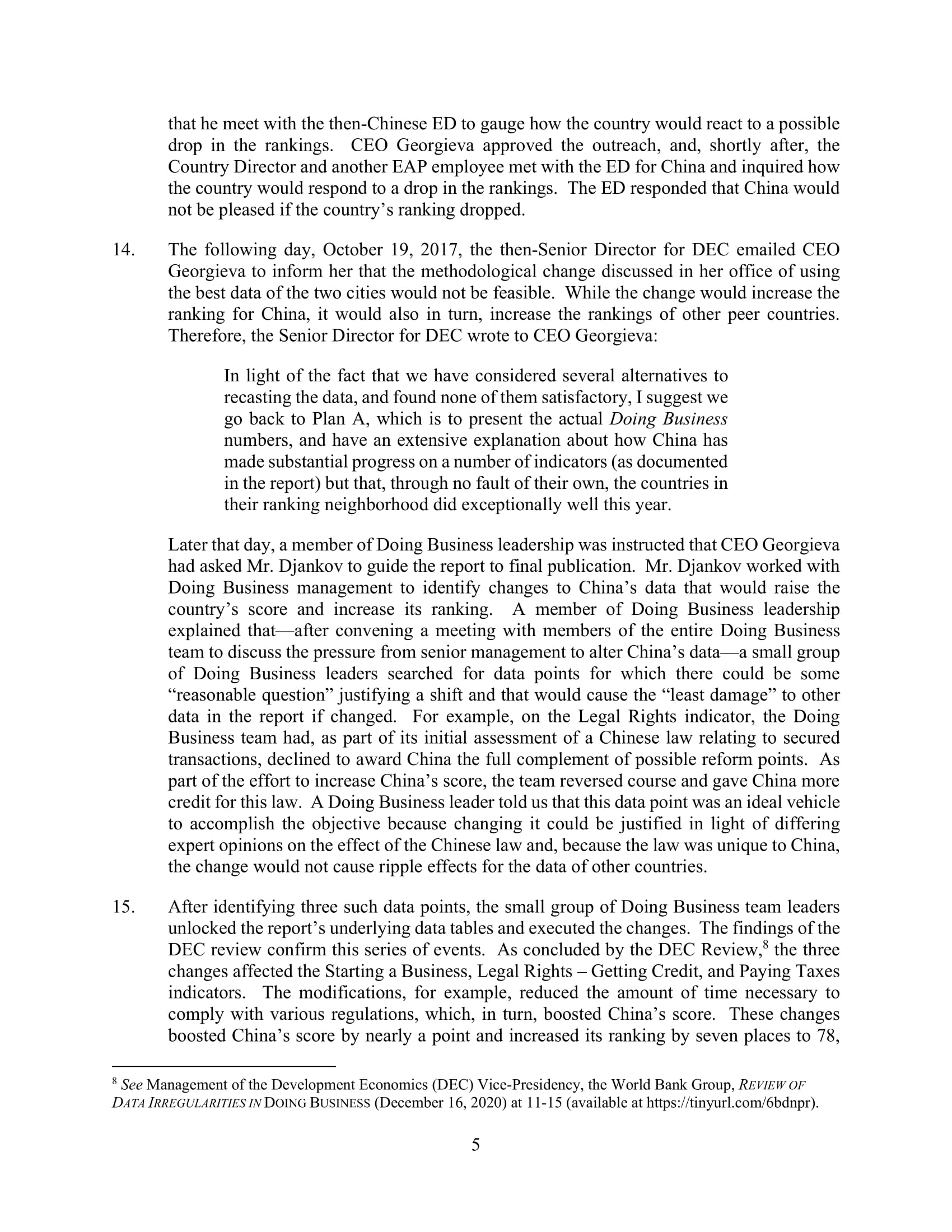 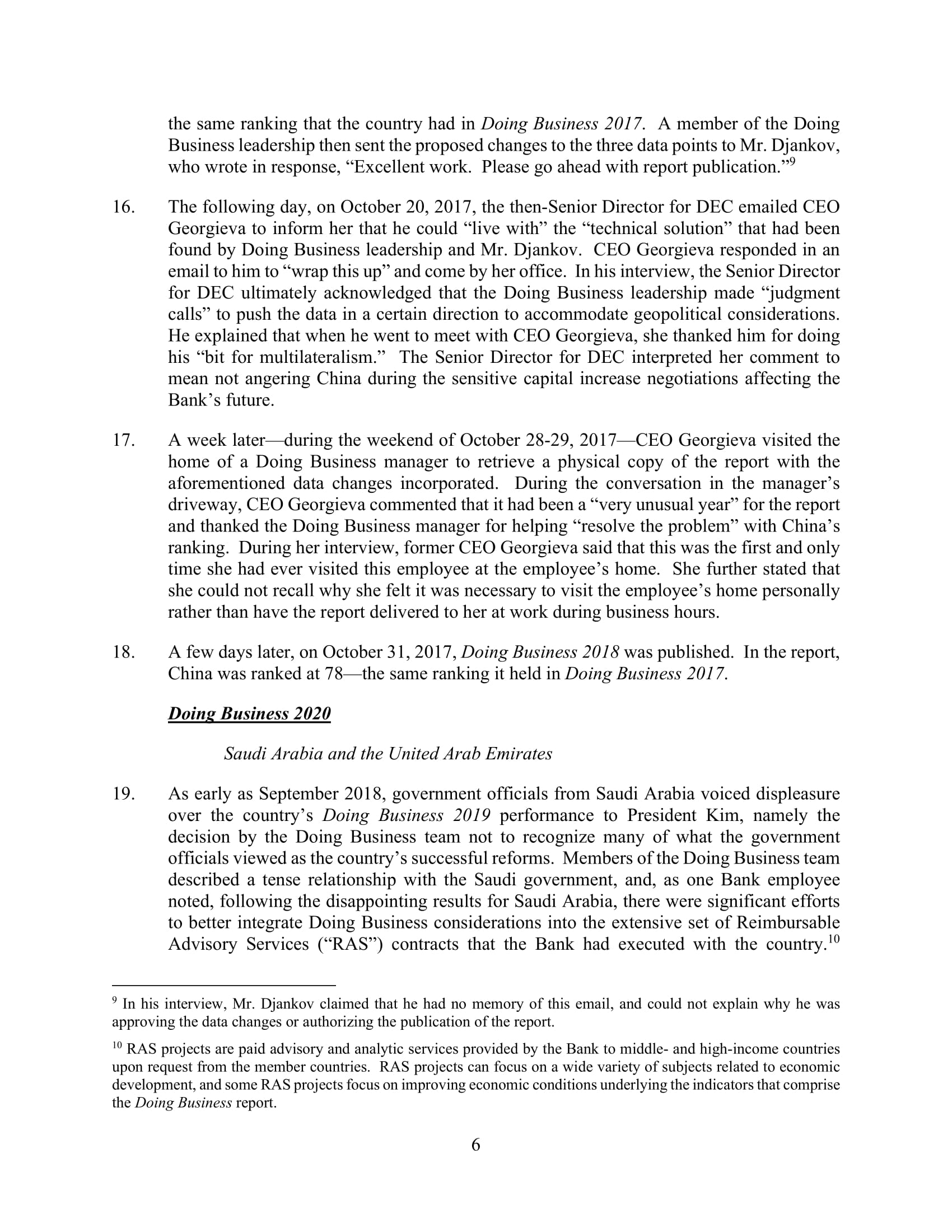 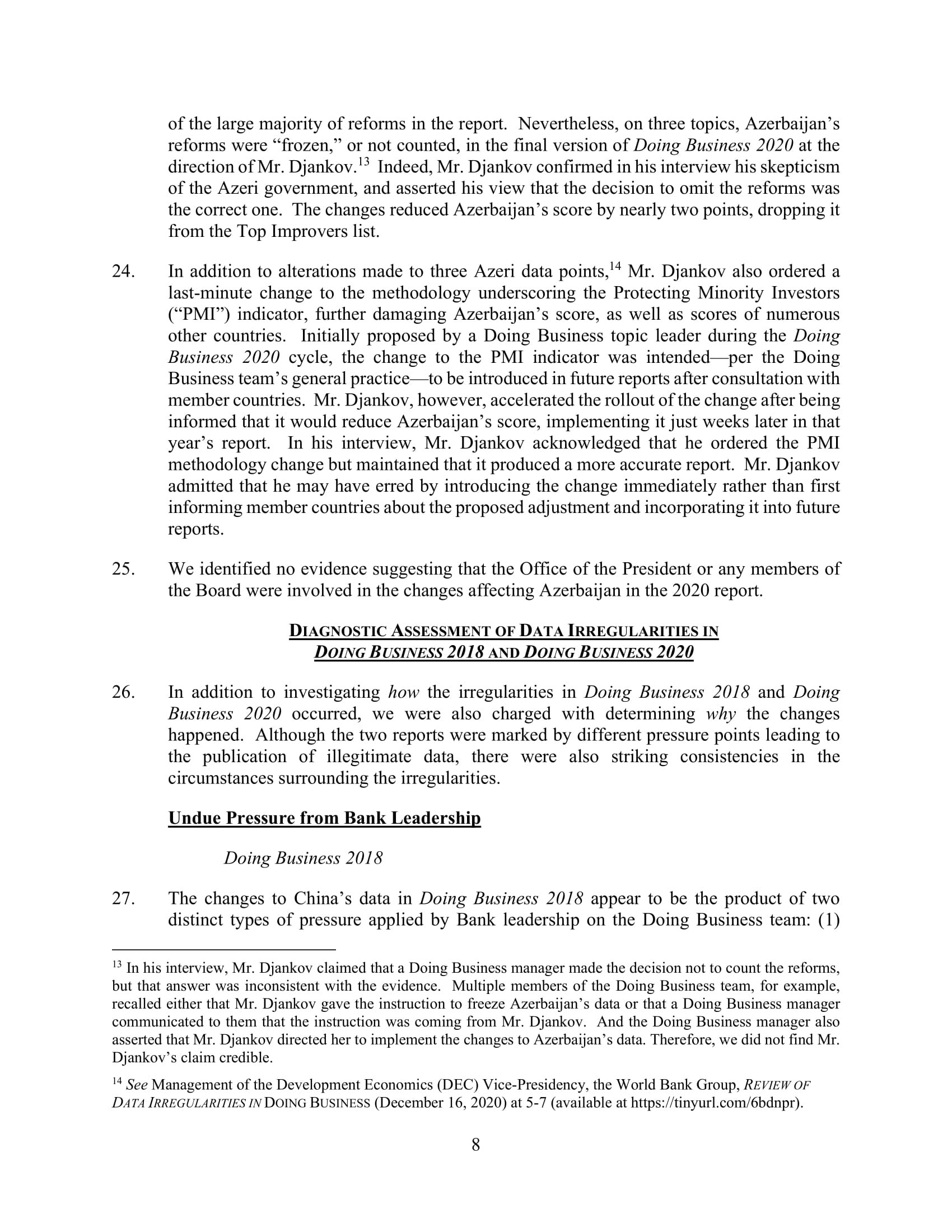 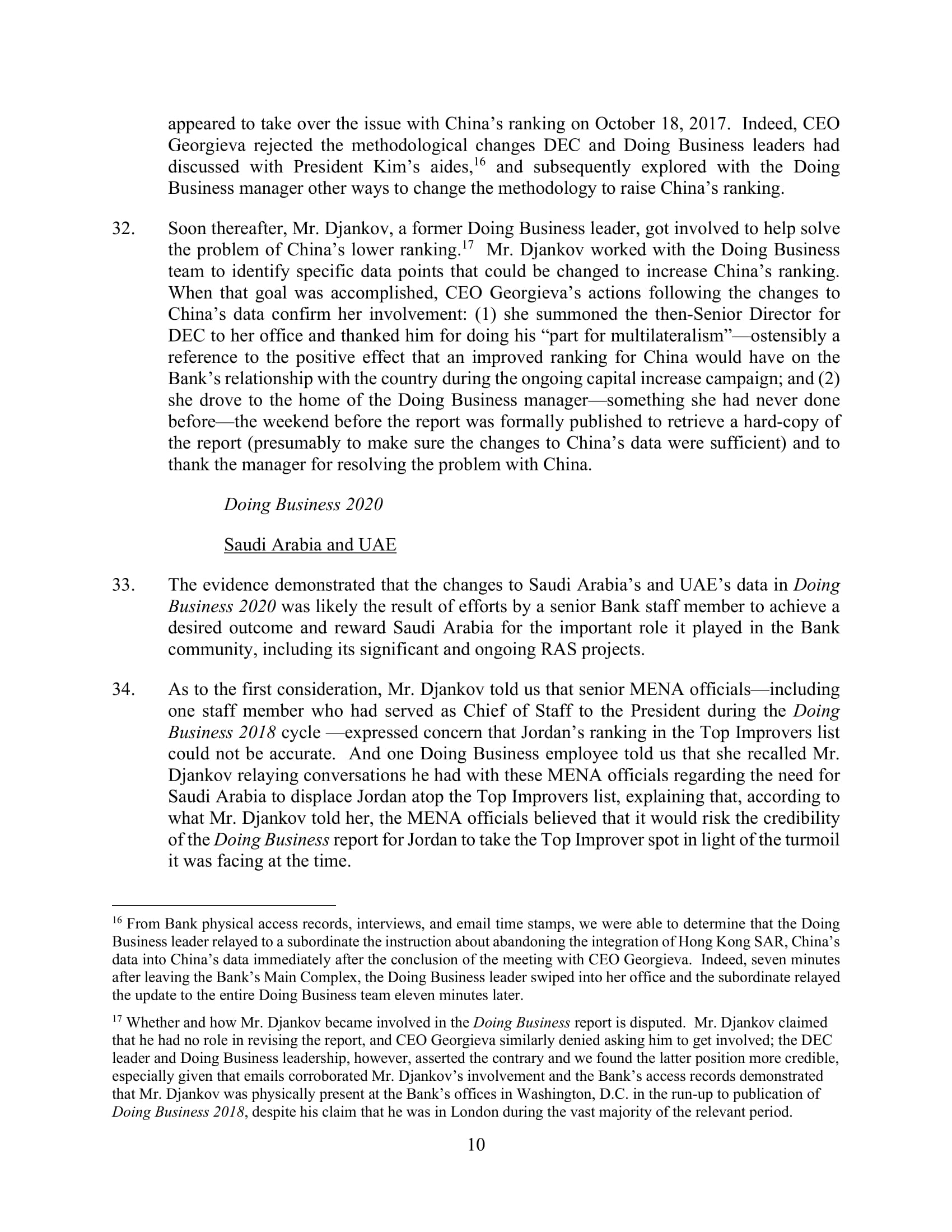 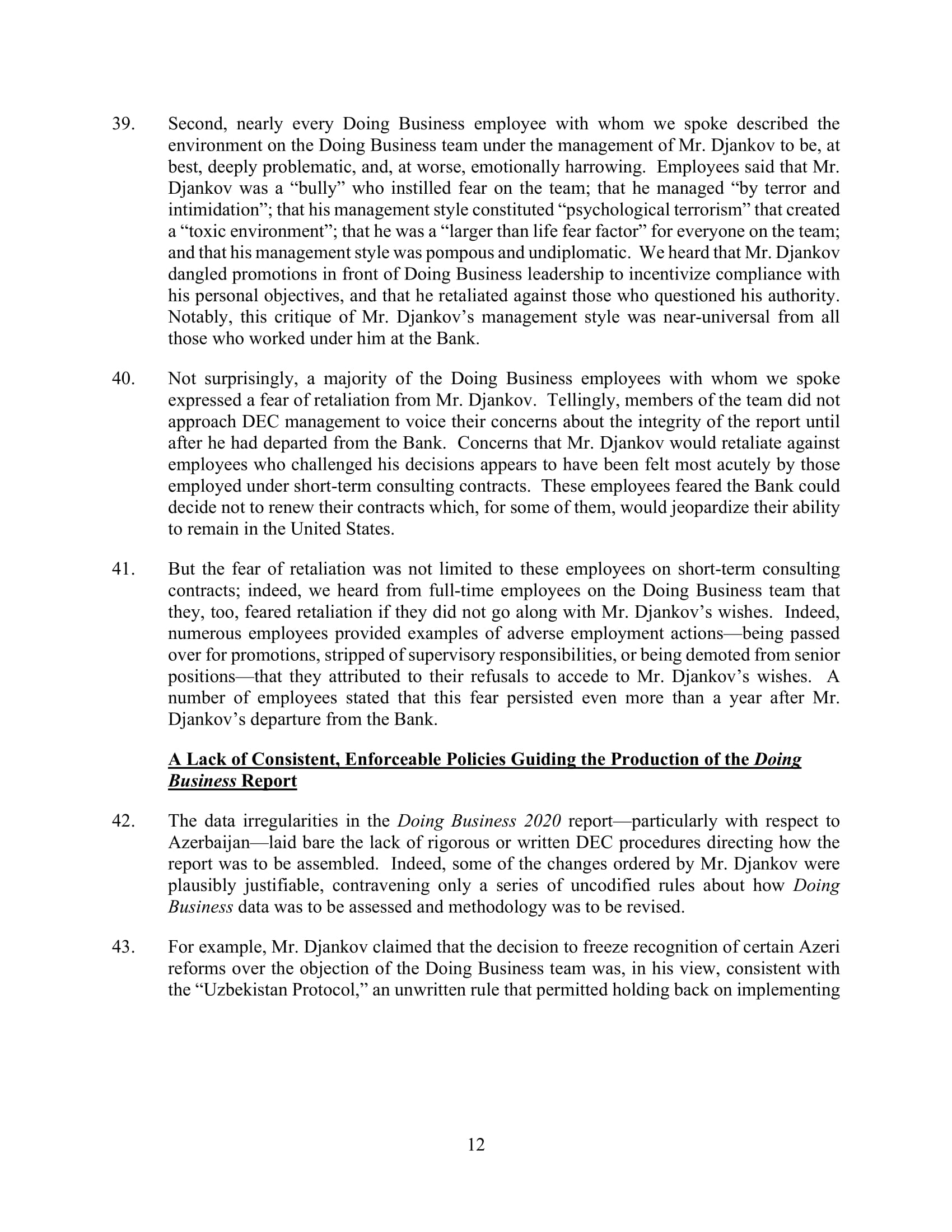 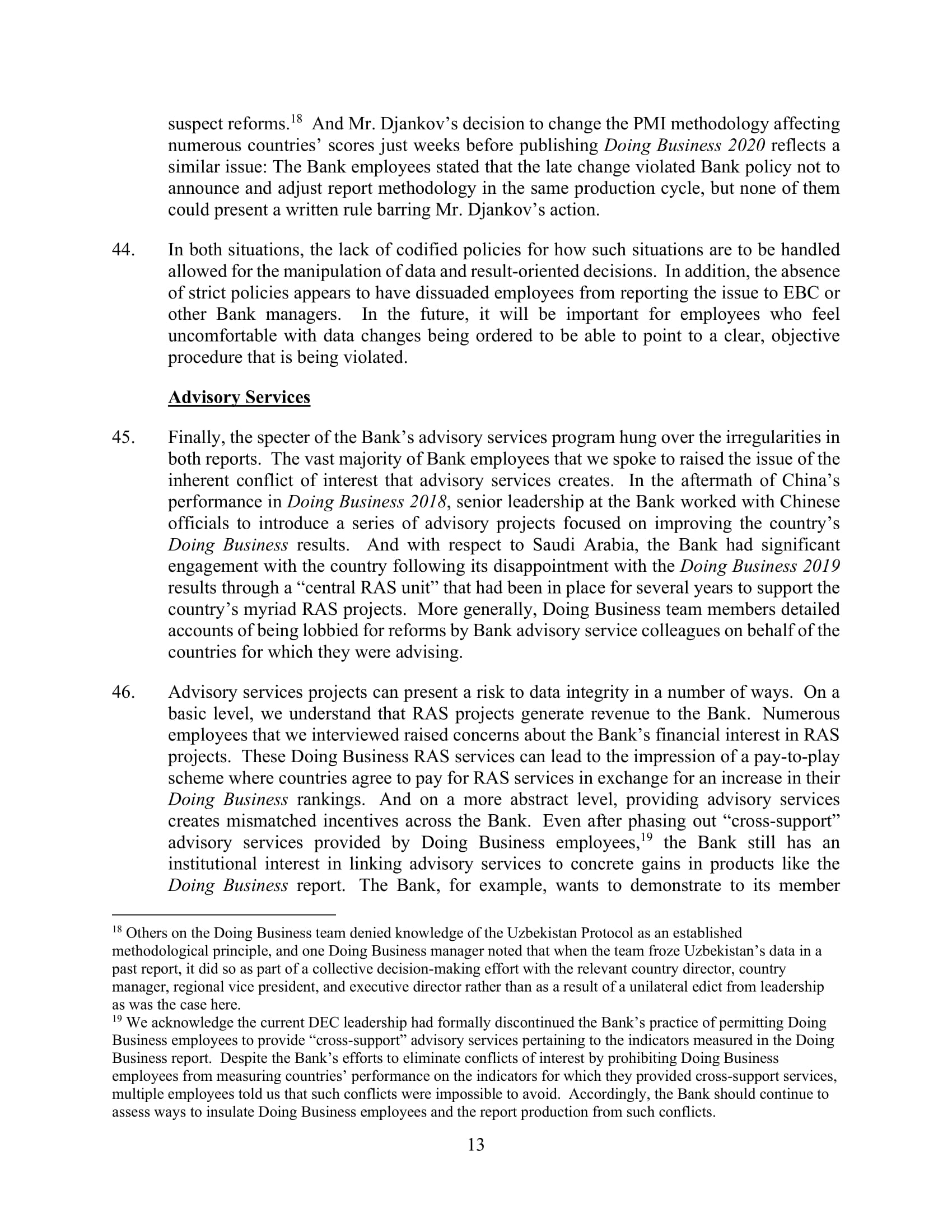 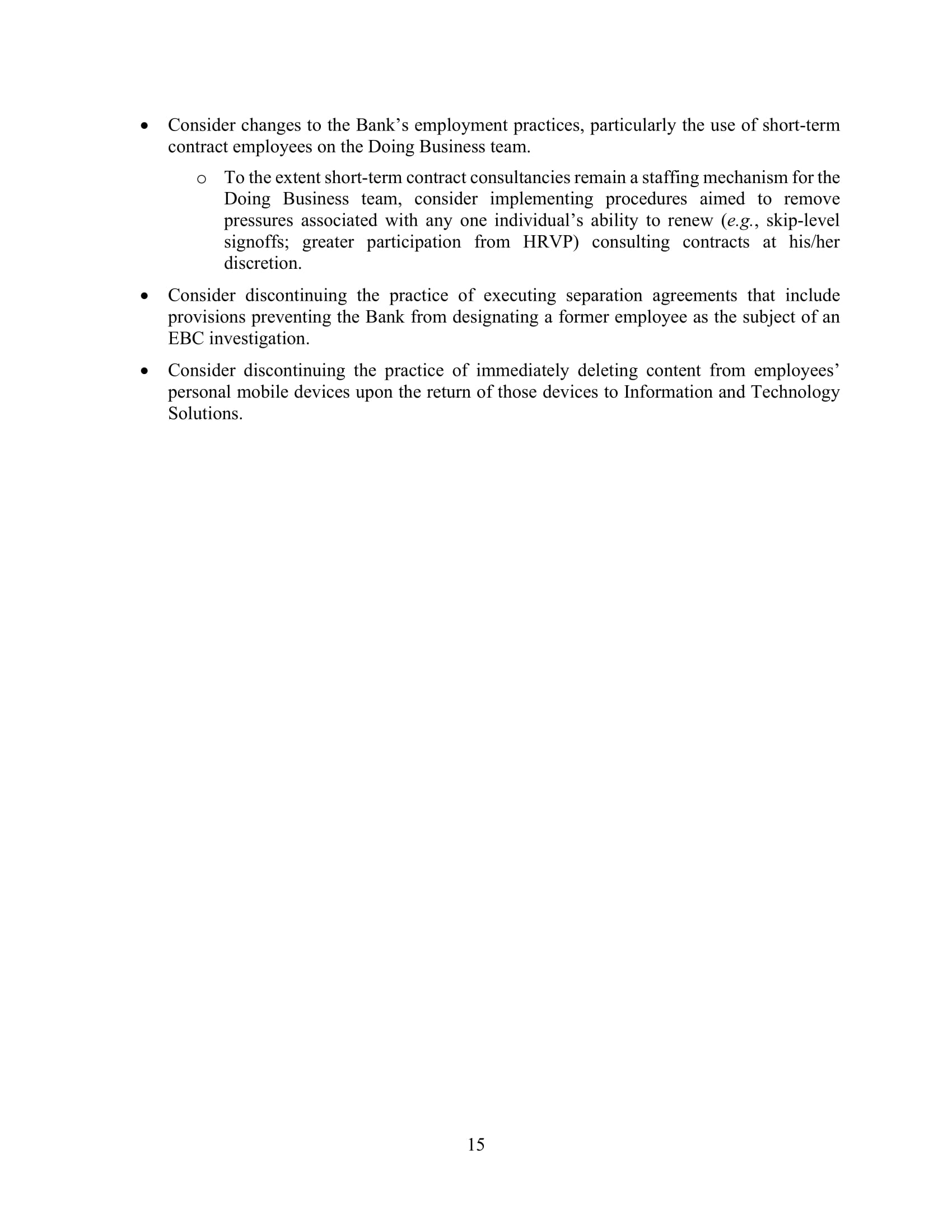