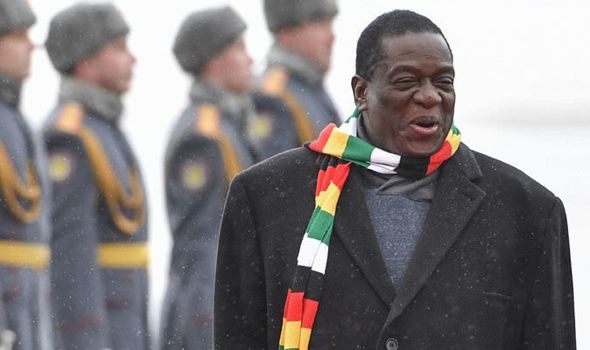 Emmerson Mnangagwa is on a tour of Europe (Image: ALEXANDER NEMENOV/AFP/Getty)

Mnangagwa’s announcement of a 150 percent increase in fuel prices was greeted with shock in Zimbabwe where unemployment is over 80 percent. The government sets fuel prices via the Zimbabwe Energy Regulatory Agency.

Residents of Epworth, 22 miles south of the capital, protested after the main labour federation called for a three-day strike starting on Monday in response to the price increase.

“The main roads to town have been barricaded with rocks and there is no public transport carrying people,” Phibeon Machona, a 27-year-old Epworth resident said.

Police fired teargas to disperse youths protesting outside the high court in Zimbabwe’s second city of Bulawayo, according to video footage from the Centre For Innovation & Technology, a local news service. 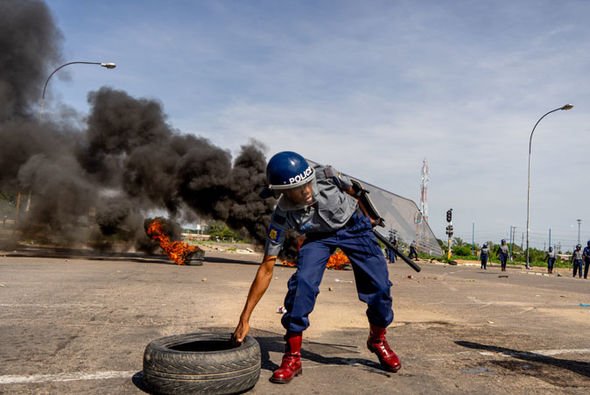 Early on Monday Mnangagwa set off on a five-nation tour which starts in Russia and ends at the World Economic Forum in Davos, Switzerland.

Shops closed in downtown Harare as riot police patrolled the streets and a military helicopter flew over the capital.

President Emmerson Mnangagwa on Saturday night announced a rise in the price of petrol and diesel in a move he said would end fuel shortages.

“We have suffered enough,” author Philani Nyoni who was part of the protest in Bulawayo.

“The government is now aware that we are not happy with their stupid policies like the fuel price increase,” said Nyoni, calling on the president to return home to “sort out things”.