THE embattled Zimbabwean President Emmerson Mnangagwa has appointed an Israeli national Ronny Levi Musan as the Honorary Consul of Zimbabwe in Israel.

The Israeli born Musan is on record saying he only started having a  relationship with Zimbabwe a few years ago.

“My connection with Zimbabwe began few years ago on the spiritual plane. I’m happy about that, since only God can guide us the true way.” Musan posted on Twitter recently.

Meanwhile, South Africa, Zimbabwe’s biggest and most influential neighbour in 2019 replaced its ambassador to Israel. At the time, the South Africa International Relations Ministry issued a statement saying it was downgrading its relations with Israel to the level of liaison bureau, which will not deal with bilateral relations.

Ambassador to at the time Israel Sisa Ngombane, was recalled to protest the killing of demonstrators in Gaza, and he never returned and there was no re-appointment. South Africa has essentially severed diplomatic relations with Israel and the ruling party ANC has never forgiven Israeli for supplying arms to the South Africa apartheid government.

This latest move by President Mnangagwa’s government is likely to raise the stakes on South Africa’s interventions in the Zimbabwean political crisis.

But analysts think President Mnangagwa is more likely to gain leverage in his lobby for re-engagement with the West. Zimbabwe also has diplomatic relations with Iran which dates back to the Rhodesian era. 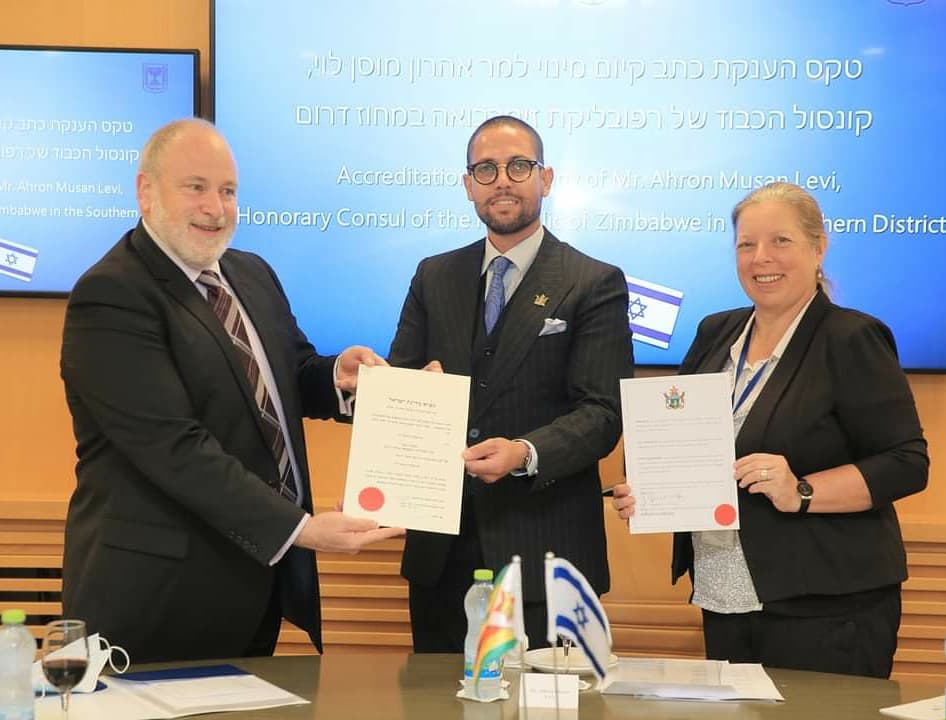 Musan thanked the President for giving him the important role of running the Embassy of Zimbabwe in Israel.

“My appointment as honorary consul of Zimbabwe in Israel. My sincere gratitude to His Excellency President Emmerson Dambudzo Mnangagwa, for the trust he has placed in me, to act in His name for the sake of Zimbabwe and its citizens. May God bless Israel & Zimbabwe.”

Without wasting much time in his new office, Musan has began meeting with the Israeli Minister of the Interior, Aryeh Deri to negotiate for the sake of the of Zimbabwe.

Recently he delivered a special message to Pierbattista Pizzaballa the current apostolic administrator of the Latin Patriarchate of Jerusalem inviting him to come and bless Zimbabwe.

Said Musa, “As Honorary Consul of ZIM in Israel and as a Church Representative, this morning I had the honor of personally delivering to my dear friend, Arc. Pizzaballa, Head of Holy Land Church , the official invitation of the President of ZIM, that invited him to come and bless Zimbabwe.”

However, not everyone is happy with the move by President Mnangagwa to appoint Musan.

A ZANU PF Central Committee member based in Harare who spoke  to this reporter on condition of anonymity said the move by the President was a betrayal of the values that the party stands for.

“The President’s decision is irrational and goes against the spirit of and policies of the party in regards to the Israel-Palestine conflict,” the member said. “Its on record that ZANU PF and Zimbabwe condemn the occupying Power, for continuing its policies and practices, which violate the provisions of the Fourth Geneva Convention of 1949 and the relevant resolutions of the United Nations Security Council.

“It’s unthinkable that the President establishes relations with a country known for the criminal practices in the Gaza Strip and on the West Bank, killing of defenseless Palestinians, as well as the torturing, wounding, massive arrests and detention of citizens. The President is betraying the movement. He is being misled by some lobby groups from Washington and has been made to make strange liberal decisions such as compensating white farmers as a means of endearing himself to the West.”

In 2019, Foreign Affairs deputy minister David Musabayana told a gathering during  commemorations of the international day of solidarity with the Palestinian people in Harare that, “We re-affirm our support for the United Nations Security Council resolutions that call for a peaceful resolution of the conflict between Palestine and Israel and the establishment of a free Palestinian State within the 1967 borders with East Jerusalem as its capital.

“Over the years, the Palestinian people have demonstrated a tremendous amount of patience, a level of patience that has surprised even their adversaries…Regrettably, ever since the signing of the Oslo agreements, we have witnessed a systematic and relentless increase in occupation of more and more of the Palestinian land,.”

In 2018, the neighbouring  South African government took a decision to downgrade its Israeli embassy to a liaison office, in line with a resolution taken by the ANC during its 2017 elective conference.

The then Ambassador Sisa Ngombane was withdrawn from Tel Aviv in May 2018, following the killings of a number of protesting Palestinians by the Israeli army in Gaza.