Compatriots, much as I would like to, sadly I’m unable to wish you a happy & prosperous new year not because of anything personal but because happiness & prosperity are no longer possible in Zimbabwe due to the live coup against the will of the people!

It is a biblical truth, supported by human experience, that where there’s no vision the people perish. The new year, 2020, presents a new opportunity for Zimbabweans to find each other, speak with one voice & act together to oppose what’s wrong in support of what’s right!

While there are many wrongs surrounding Zimbabweans today, a particularly insidious wrong that’s crying out for righting is the stolen 30 July 2018 presidential election, preceded by the 15 Nov 2017 military coup & followed by brutal massacres on 1 Aug 2018 & 14-28 Jan 2019!

I’ll return to the stolen 2018 election in a bit. When I signalled here a few days ago that I would be doing this thread today, some paranoid & desperate attention seekers said I had no right to vision for Zimbabwe or to speak for ZanuPF etc. I need to address this nonsense!

It’s notable that the paranoid & desperate attention seekers used my TL to bark their nonsense. Do they have a right to do that? Let freedom ring. I said I’ll thread about, not for, myself, ZanuPF, @ZECzim, the 2018 presidential election or Zimbabwe because enough is enough!

I wish to make it clear for the umpteenth time that I’m done with ZanuPF.  My differences with ZanuPF are existential & permanently irreconcilable, come rain or shine. In 2005, ZanuPF deemed me to have expelled myself from itself by running as an Independent in Tsholotsho!

While it’s true that ZanuPF murderers used military violence to boot me out of what they declared to be their thing (“chunhu chedu”) in Nov 2017, John Mangudya knew I was exiting ZanuPF & politics in Dec 2017 when I asked for his help over a mining loan I sought in Aug 2017!

I was done with ZanuPF when I  gave my blue ocean video to the politburo in July 2017. I knew then that a military coup was loading & that President Mugabe would not be able to stop it. But I did not know the coup would target me as enemy No.1, a fact in the coup minutes!

Since Nov 2017, I have sought to understand why, after using Zimpapers, Zacc & the NPA against me with unprecedented malice & after seizing State power, Mnangagwa & Chiwenga still made sure they sent special forces to attack my home with AK47s, explosives & stun grenades!1

I now have an explanation. But before I share it, let me highlight a huge challenge we have as Zimbabweans. Although we have not been credited for it, because we are not functionally literate as a society, we, not Trumpians in the US, are the inventors of alternative facts!

Most Zimbabweans don’t care for facts. To them & we see it daily in these streets, facts are what they manufacture in their heads, hearts, dreams, nightmares, fears, likes, dislikes & hallucinations. No wonder, public discourse in Zimbabwe is not fact based or fact driven!

Last week there was widespread chatter, fueled by quarters that ought to know better, that Mnangagwa was self-marooned, unable take his annual leave or to leave the country, “fearing a Chiwenga coup” when Chiwenga was back in China to resume his treatment & recuperation!

Mnangagwa has not taken his annual leave & has not been able to leave the country because of a foiled coup in early November. The attempted coup cost Aaron Nhepera his job as CIO Deputy Director General, amid allegations he reported it late & mishandled intelligence on it!

The aftermath of the attempted coup has left Mnangagwa holed up, fearing fear itself, and has engendered panic in his inner circle which has alarmed & embarrased Sadc by turning POLAD election losers into a foreign policy tool; on the eve of Ramaphosa becoming AU chairman!

So Zimbabwe is in a triple crisis: (i) Mnangagwa has no legitimacy & authority to unite & inspire the nation; (ii) worse, he has lost the confidence of the armed forces; & (iii) his government is incapable of reviving the economy, which is now in an irretrievable free fall!

As the post-2017 coup dispensation is crumbling under the weight of its the triple crisis, it is sad that the people are speaking in tongues & acting at cross purposes; with the result of widening political divisions, when they should be bridging them under a shared vision!

Looking back over the last 20 years, the people have squandered three opportunities for real change in 2000; then 2009 to 2013; and in 2017 when ZanuPF & the Army dug their own grave only for the people to fail to bury the two. Now there’s yet another opportunity: 2020!

On 30 July 2018, the people voted for @nelsonchamisa. He got 66% of the vote against Mnangagwa’s 33%. The unassailable evidence for this I present in Excelgate. Soldiers were sent to attack my home for many reasons, including that they knew I know how they steal elections!

I studied electoral politics in Zimbabwe: 1985-92 & published VOTING FOR DEMOCRACY.  In 2000 I managed ZanuPF election campaign as a consultant; in 2002 as information minister & in 2013 as   a campaign manager. In 2018 I used my contacts & experience to write EXCELGATE!

While VOTING FOR DEMOCRACY is about the voter, I had no access to the system; EXCELGATE is on the administration & conduct of elections, I had 20 years of access to the system. Now I can authoritatively say how elections have been rigged in Zimbabwe, including against me!

Here’s a sample of how the military used Fairhaven’s Africom & CIO’s Chiltern Trust to get @ZECzim to hijack & steal the results of the 2018 presidential election from all ward centres to manipulate in Harare; against peremptory provisions of s37C(4) of the Electoral Act!

On 31 July 2018, after the Army got @ZECzim to invent an illegal route & destination for the transmission, capture & collation of  the presidential results, Priscilla Chigumba sent shocking WhatsApp msgs confirming rigging, using V11s & not the critical V23Bs. Ngati nyoo!

It’s 2020, 40 years later. Back to the future. Ian Smith’s internal settlement sellouts have resurrected as POLAD puppets. A new patriotic front beckons. The old must give way to the young & the will of the people stolen in 2018 must be restored otherwise No Happy New Year!

24/24 It’s 2020, 40 years later. Back to the future. Ian Smith’s internal settlement sellouts have resurrected as POLAD puppets. A new patriotic front beckons. The old must give way to the young & the will of the people stolen in 2018 must be restored otherwise No Happy New Year! 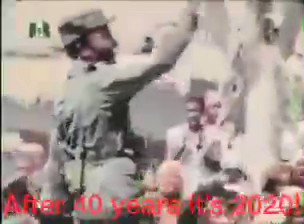