HARARE, Zimbabwe (AP) — Zimbabwe’s founding leader Robert Mugabe made his final journey back to the country Wednesday, his body flown into the capital amid the contradictions of his long, controversial rule.

President Emmerson Mnangagwa, Mugabe’s closest ally and vice president before joining the military-led effort to oust him in 2017, addressed the airport gathering of about 1,000, praising Mugabe as “our revolutionary commander … an icon of pan-Africanism” and “the man who created our nation.”

The former guerrilla leader, who died Friday at 95 in a hospital in Singapore, led the fight to end white-minority rule in what was then Rhodesia, and ruled Zimbabwe from its independence in 1980 until he was deposed. During his 37-year authoritarian leadership, Zimbabwe descended from prosperity to economic crisis marked by hyperinflation, unemployment and a drastic drop in living conditions for its 16 million people. 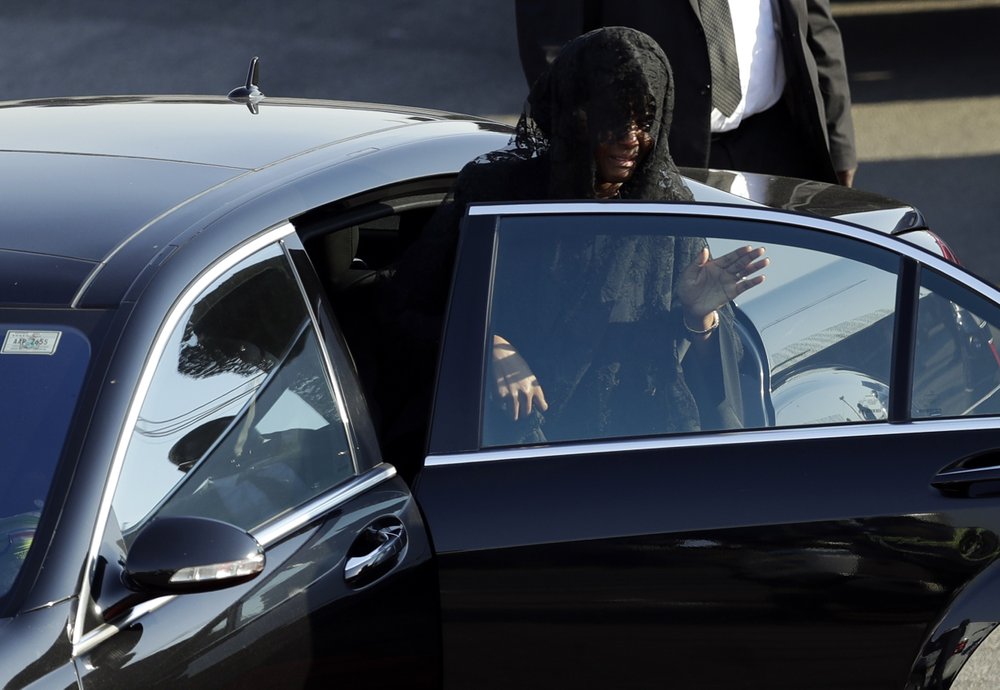 Wednesday’s subdued airport gathering was a far cry from the tumultuous crowd of 100,000 that swarmed the airport in January 1980 to welcome Mugabe back after years in exile. That boisterous greeting rocked Rhodesia and was a dramatic signal that its days of white minority rule were numbered. Within months Mugabe was elected president and sworn in as the leader of the new nation of Zimbabwe. 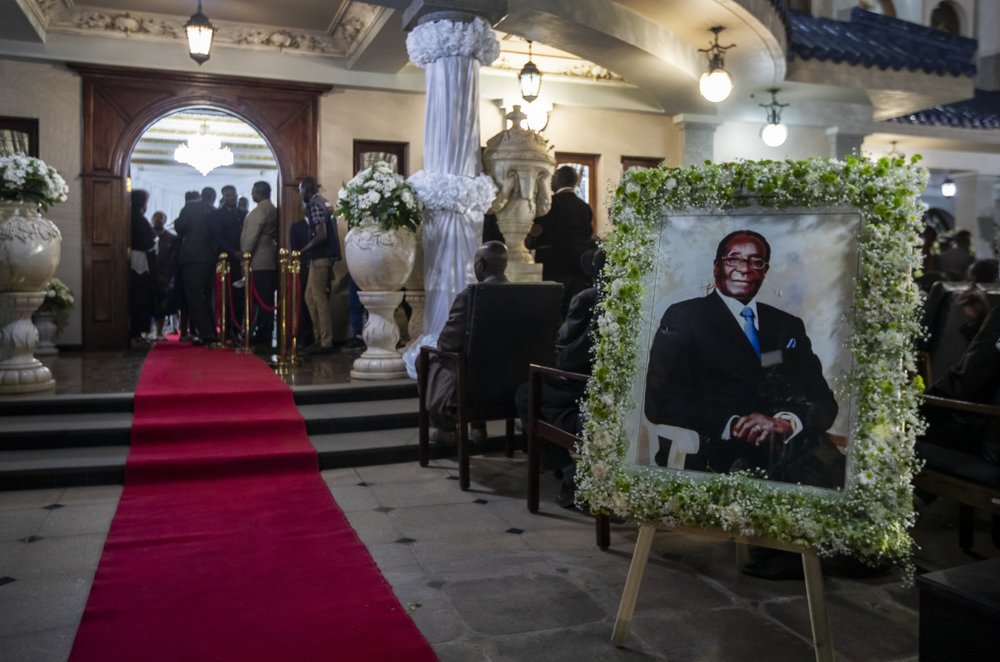 By contrast, no supporters were seen lining the streets of Zimbabwe’s capital on Wednesday to mark the passing of the country’s founding leader. Harare otherwise bustled with residents scrambling to cope with the country’s economic deterioration, with vehicles lined up for scarce fuel, people gathering to pump water from neighborhood wells because of a widespread shortage and currency dealers selling cash.

The shortages and power cuts lasting up to 19 hours a day are the latest symptoms of Zimbabwe’s economic decline that began in 2000 when Mugabe launched the seizures of farms owned by whites. The chaotic, often violent confiscations triggered a collapse of the once productive agricultural sector and began a downward economic spiral. Further mismanagement brought about hyperinflation reaching more than a billion percent in 2009, which was only halted when the country abandoned its currency for the U.S. dollar.

Mnangagwa has vowed to return Zimbabwe to affluence but in his nearly two years in power he has not succeeded in eradicating corrosive corruption or achieving substantial economic growth. 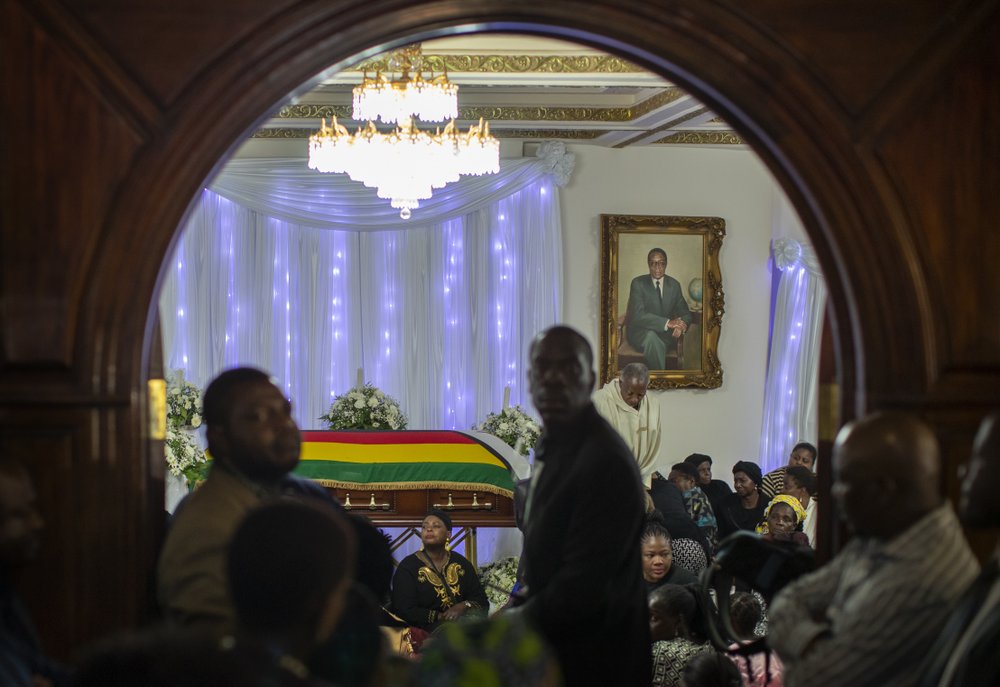 Mugabe’s body was to be displayed at several historic locations before burial Sunday at an as yet unannounced site, a sign of the friction between the ex-leader’s family and the government.

Widow Grace Mugabe, her face covered in a heavy black veil, sat next to Mnangagwa as Mugabe’s casket, draped with a Zimbabwean flag, was wheeled to a podium by top military generals, several of whom had participated in his ouster. Grace Mugabe had bitterly denounced Mnangagwa before her husband’s downfall, yet there was no show of antagonism during the short ceremony.

Mugabe’s casket was then taken to a nearby military barracks for prayers before going to the family’s 25-bedroom home in the posh Borrowdale suburb for an evening gathering. At Blue Roof, Mugabe’s expansive mansion named for its striking bright blue Chinese tiled roof, dozens of wailing relatives and friends welcomed Grace and her husband’s coffin, carried by members of presidential guard, before a church service got underway.

Mnangagwa did not come to the Mugabe residence. 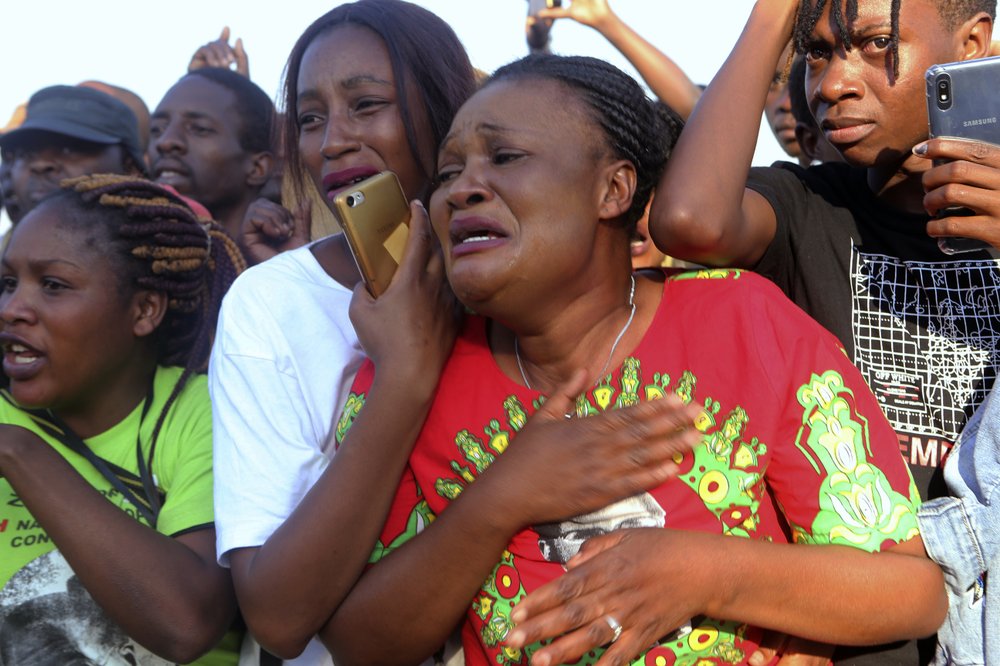 Earlier, about 500 mourners gathered in Zvimba, Mugabe’s birthplace some 85 kilometers (55 miles) northwest of Harare. The former leader’s body was expected to be taken there on Thursday, as well as to a stadium in the capital’s poor Mbare neighborhood for public viewing before being moved Saturday to the National Sports Stadium, where African heads of state, dignitaries and the public will attend a service.

Where and when the former strongman will be buried has not been announced, sparking speculation of a disagreement between the government and Mugabe’s wife and other family members. The government had earlier stated that Mugabe would be buried at the Heroes’ Acre state monument, a burial place reserved for top officials of Zimbabwe’s ruling ZANU-PF party who contributed to ending white colonial rule. But some family members said he should be buried at his birthplace, according to Zimbabwean tradition.

Leo Mugabe, Mugabe’s nephew and the family’s spokesman, told The Associated Press on Wednesday that relations are good between the family and Mnangagwa, but he would not disclose where Mugabe would be buried. 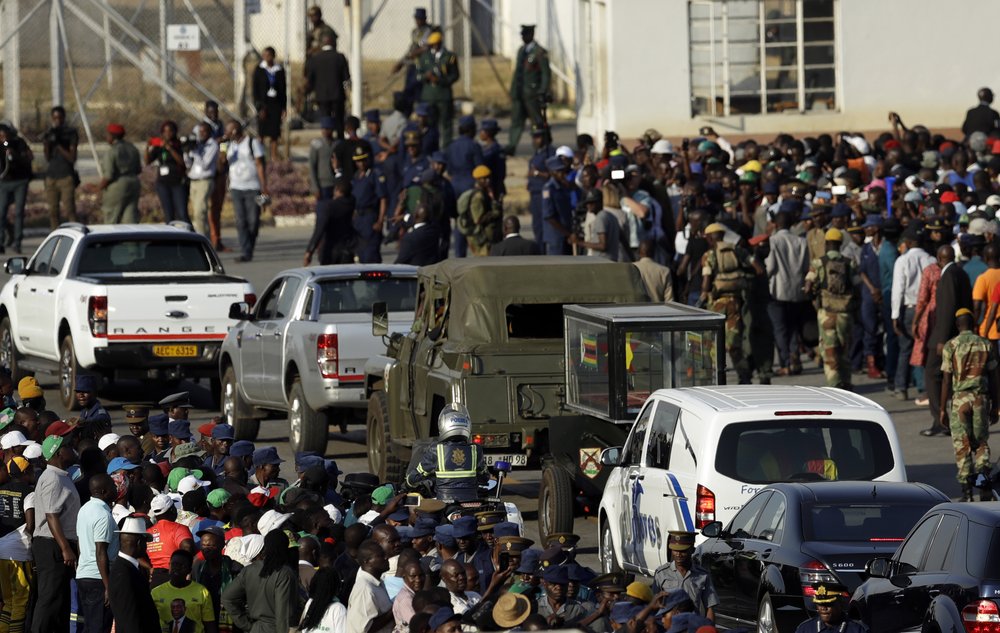 Mnangagwa “has been looking after the president, paying all the bills, sending the charter flight, inviting all the foreign dignitaries — I think he has been extra good,” Leo Mugabe said. “We went to thank him yesterday for what he has done this far. Now we really appreciate what the government has done.”

The grateful comments appeared to indicate a reconciliation between the family and Mnangagwa. Shortly after Mugabe’s death, the nephew had said Mugabe died “a very bitter man” because he felt betrayed by Mnangagwa and the army generals who were his allies for close to four decades before they put him under house arrest and forced him to resign.

It had long been expected that Mugabe would be buried at Heroes’ Acre, a monumental burial location atop a prominent hill featuring a grandiose towering sculpture of guerrilla fighters that Mugabe built with help from North Korea. Mugabe’s first wife, Sally, is buried there next to a gravesite long reserved for the ex-leader.