JOHANNESBURG – There is an emerging diplomatic disturbing stand-off between the government of South Africa and that of Robert Mugabe as it emerged this afternoon that Police in South Africa still want to charge the feisty First Lady Grace Mugabe after she beat up a girl she found with her sons.

Zimbabwean President Robert Mugabe is travelling to South Africa today to attend the 37th summit of the Southern African Development Community (SADC), giving him the opportunity to come to the rescue of his embattled wife Grace who is holed up in Johannesburg following a hotel brawl.

Contrary to false media reports that Zimbabwe’s first lady – who faces a charge of criminal assault after brutally attacking two young ladies she suspected of cohabiting with her two sons in Sandton – has fled to Harare, she is still holed up in South Africa, African Independent can reveal. 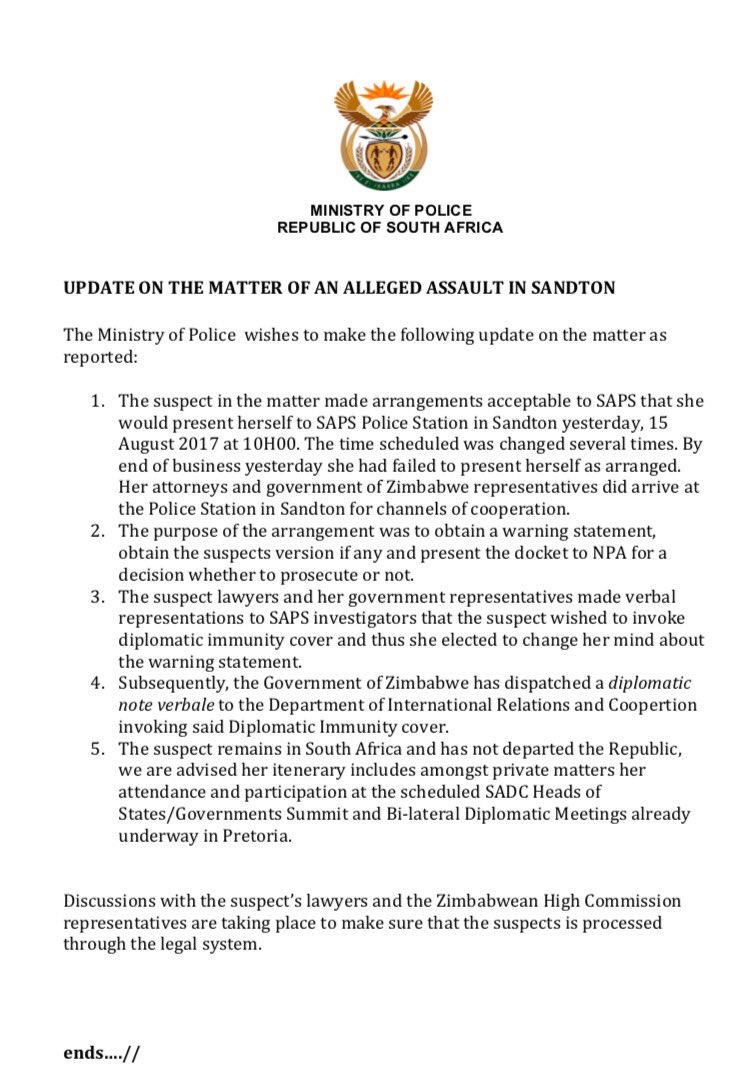 Last night, impeccable sources in Harare close to the Mugabe family said the Zimbabwean president and his South African counterpart Jacob Zuma have been in contact over the embarrassing saga which threatens to complicate relations between the two countries.

We can also reveal that President Mugabe is today expected to chair a Cabinet meeting in the Zimbabwean capital before flying to South Africa.

Legal advisors have told Grace that although she can easily evade the assault charge she faces by slipping out of South Africa, she could be declared a fugitive, making it near-impossible for her to visit that country again.

On the basis of the legal advice, Mugabe’s wife has remained in Johannesburg where she has kept a low profile, much to the confusion of journalists who camped outside the Randburg Magistrates’ Court on Tuesday, waiting in vain for her court appearance.

The lawyers have advised Grace to abide by due process. Their calculation is that she will appear before a magistrate, possibly today, plead guilty and pay a fine. That way, she will avoid being declared either a fugitive or persona non grata (prohibited foreigner).

Mugabe’s wife is accused of beating up Gabriella Engels, 20, who says she is a Johannesburg-based model, after finding her in a hotel room with her two sons Robert Jnr, 24, and Bellermine Chatunga, 20, in Sandton on Sunday night.

Engels sustained three deep cuts on the head—including one on the forehead—which have had to be stitched up. South African Police Minister Fikile Mbalula has confirmed that an assault case has been filed against Mugabe’s wife.

Alex Magaisa, a Zimbabwean legal researcher at the University of Kent in Britain, says the violent incident is deeply embarrassing to Mugabe and his family.

“People expect their First Lady to conduct herself with grace and to demonstrate the etiquette befitting a person of that station,” says Magaisa.