LONDON -Zimbabwean president Robert Mugabe’s appointment as a “goodwill ambassador” for the World Health Organisation is “surprising and disappointing” given his regime’s record of human rights abuses, the UK Government has said.

A spokesman said Britain has raised concerns with the WHO director general Tedros Adhanom Ghebreyesus over Mr Mugabe’s new role, warning that it risks overshadowing the organisation’s work on chronic diseases. 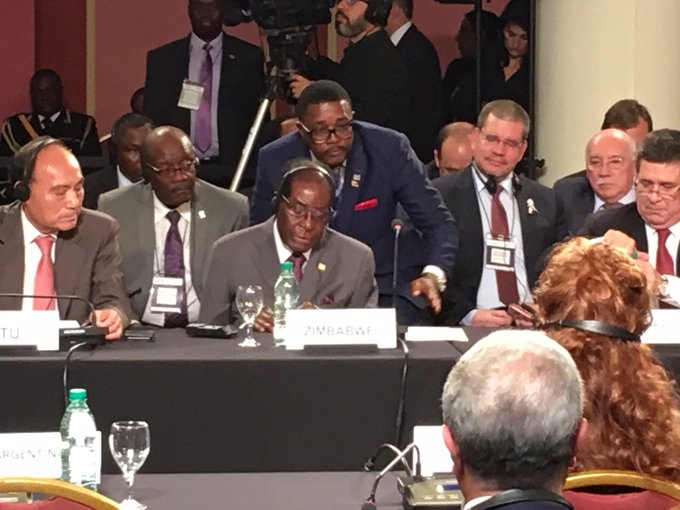 Commenting on his appointment, the UK Government spokesman said: “President Mugabe’s appointment is surprising and disappointing, particularly in light of the current US and EU sanctions against him.

“We have registered our concerns with WHO director general Dr Tedros Adhanom Ghebreyesus.

“Although Mugabe will not have an executive role, his appointment risks overshadowing the work undertaken globally by the WHO on non-communicable diseases.” 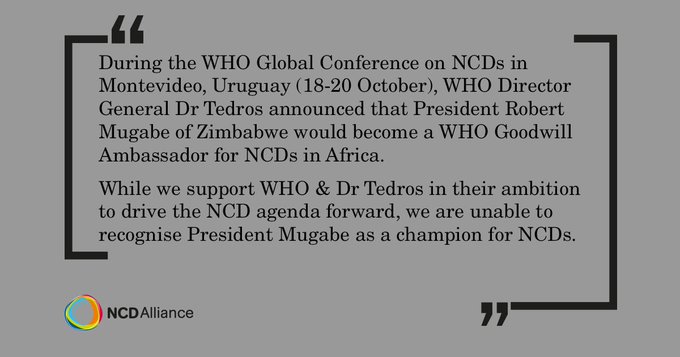 Civil Society statement on appointment of President Robert Mugabe as @WHO Goodwill Ambassador for #NCDs in Africa https://ncdalliance.org/news-events/news/appointment-of-president-robert-mugabe-as-who-goodwill-ambassador-for-ncds-in-africa-%C2%A0 …

Mr Tedros, an Ethiopian who became the WHO’s first African director-general this year said Mr Mugabe could use his role “to influence his peers in the region” and claimed Zimbabwe was “a country that places universal health coverage and health promotion at the centre of its policies to provide healthcare to all”.

But despite once being known as the breadbasket of southern Africa, in 2008 a charity released a report documenting failures in Zimbabwe’s health system and blamed Mr Mugabe for policies that led to a man-made crisis.

Physicians for Human Rights found his government had “presided over the dramatic reversal of its population’s access to food, clean water, basic sanitation and health care”.

It went on: “The Mugabe regime has used any means at its disposal, including politicising the health sector, to maintain its hold on power.”

The report said Mr Mugabe’s policies had led to “the shuttering of hospitals and clinics, the closing of its medical school and the beatings of health workers”.

WHO Director-General Tedros Adhanom Ghebreyesus announced the appointment at a high-level meeting on non-communicable diseases (NCDs) in Uruguay on Wednesday.

The meeting was attended by Mugabe, 93. He is blamed in the West for destroying his country’s economy and numerous human rights abuses during his 37 years leading the country as either president or prime minister.

In a speech, Tedros praised Zimbabwe as “a country that places universal health coverage and health promotion at the centre of its policies to provide health care to all”.

The former Ethiopian health and foreign minister, who was elected last May as WHO’s first African director-general, added: “Today I am also honoured to announce that President Mugabe has agreed to serve as a goodwill ambassador on NCDs for Africa to influence his peers in his region to prioritize NCDs.”

Iain Levine, deputy executive director for programmes at Human Rights Watch, said on Twitter: “Given Mugabe’s appalling human rights record, calling him a goodwill ambassador for anything embarrasses WHO and Dr Tedros.”

WHO spokesman Christian Lindmeier said the WHO chief was seeking broad support for the agency’s work.

“Tedros has frequently talked of his determination to build a global movement to promote high-level political leadership for health,” he said by e-mail.

Hillel Neuer, executive director of the Geneva-based group UN Watch, issued a statement late on Friday criticising the choice by WHO, a United Nations agency.

”The government of Robert Mugabe has brutalized human rights activists, crushed democracy dissidents, and turned the breadbasket of Africa — and its health system — into a basket-case.

“The notion that the U.N. should now spin this country as a great supporter of health is, frankly, sickening,” Neuer said.

He noted that Mugabe himself had travelled to Singapore for medical treatment three times this year rather than in his homeland.

Western diplomats also voiced surprise at the appointment and said they were unaware of the “decision-making structure” behind it.