HARARE — A strong delegation of the African National Congress (ANC) led by secretary general Ace Magashule has arrived in Zimbabwe amid political tensions in the country with the ruling Zanu PF party describing the visit as a bilateral arrangement of the two former liberation movements.

Magashule, who is accompanied by Lindiwe Zulu, Gwede Mantashe, Tony Yengeni, Enock Gondongwana and Nosiviwe Ngqakula, were expected to meet with various political parties, civic society leaders and other stakeholders over the deteriorating political situation in the country.

In a statement, acting Zanu PF information secretary, Patrick Chinamasa, said, “Zanu PF wishes to make it categorically clear that this is a meeting between the Zanu PF delegation and the ANC delegation only.

“… Zanu PF will take the opportunity to share the reality on the ground in Zimbabwe, South Africa and the region candidly and frankly with their revolutionary sister, the ANC.”

A letter written by the ANC’s Magashule to Zanu PF’s secretary for administration, Obert Mpofu, states that South Africa’s ruling party “is looking forward to fruitful and constructive engagements between our two sister parties.”

President Emmerson Mnangagwa’s government insists that there is no political crisis in Zimbabwe although over 60 political activists were arrested recently while others were detained and tortured by suspected state security agents for allegedly planning to stage a public protest on July 31 on corruption and the deteriorating economic situation.

Gladys Hlatywayo of the MDC Alliance told reporters that there is need for the ANC delegation to meet with other stakeholders as Zanu PF is accused of gross human rights violations.

“We are going to have a meeting with Zanu PF to discuss various issues,” said Magushule.

In an earlier communiqué, Magashule said the meeting between the two parties was a bilateral engagement of former liberation movements requested by the national executive council (NEC) of the ANC to exchange notes on matters affecting the region. 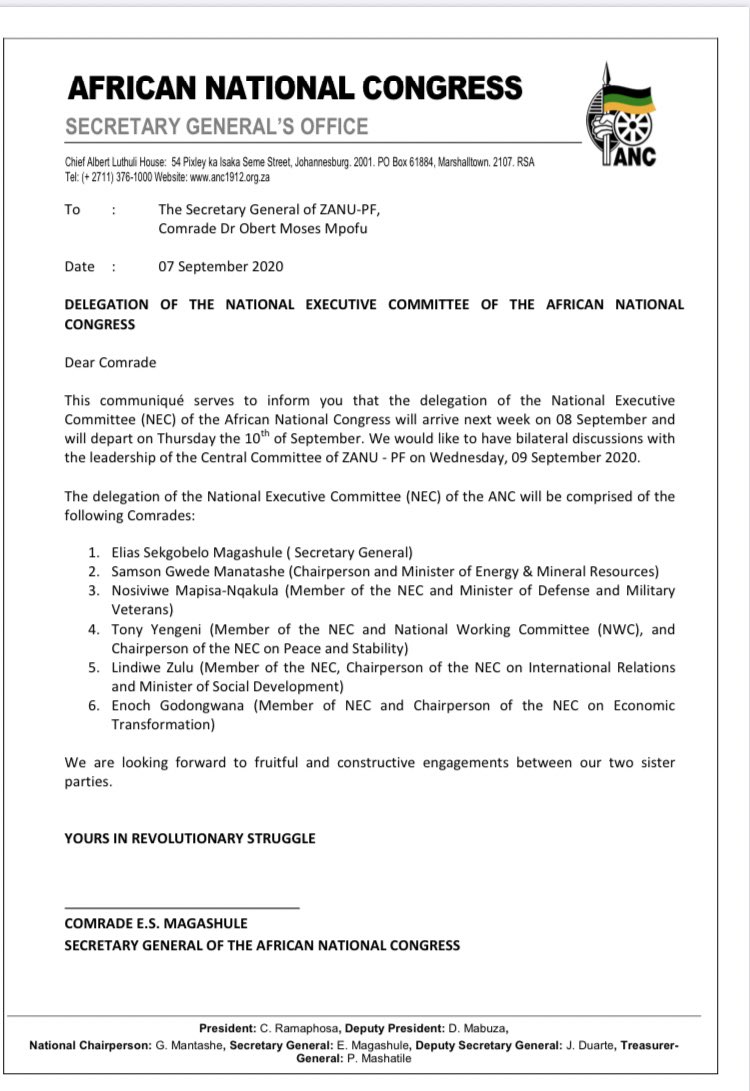 “We would like to have bilateral discussions with the leadership of the Central Committee of Zanu PF. We are looking forward to fruitful and constructive engagements between our two sister parties,” read the communiqué from Magashule, in part.

In a statement, Zanu PF acting spokesperson Patrick Chinamasa said the ANC delegation would only meet with Zanu PF as the two parties were sister parties with a shared history, and today faced similar threats from detractors who among other things wanted to manufacture a non-existent crisis in the region.

Chinamasa said Zanu PF would use the bilateral engagement with its sister party to clear the unfounded assertions of a crisis in Zimbabwe. 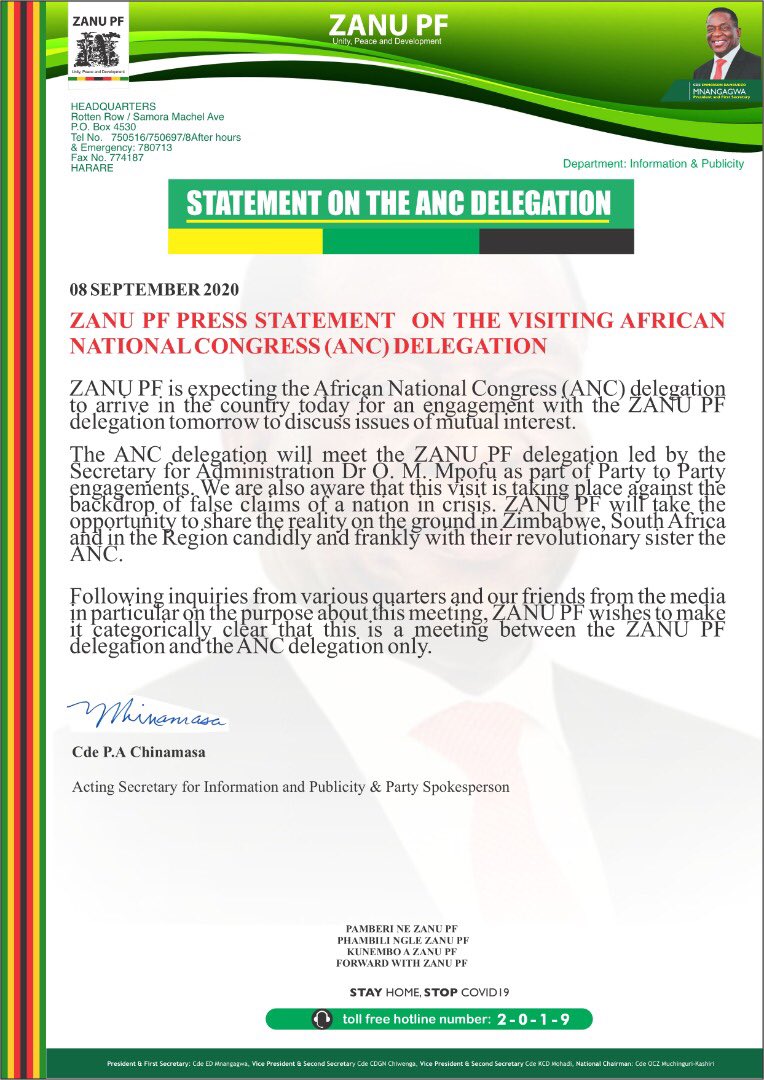 “The ANC delegation will meet the Zanu PF delegation led by the Secretary for Administration Dr Obert Mpofu as part of party to party engagements. We are also aware that this visit is taking place against the backdrop of false claims of a nation in crisis. Zanu PF will take the opportunity to share the reality on the ground in Zimbabwe, South Africa and in the region candidly and frankly with their revolutionary sister the ANC.

“Following enquiries from various quarters and our friends from the media in particular on the purpose of this meeting. Zanu PF wishes to make it categorically clear that this is a meeting between the Zanu PF delegation and the ANC delegation only,” said Chinamasa.

In their attempt to amplify a doomsday scenario in Zimbabwe, Western embassies, working with the opposition in Zimbabwe have engaged the services of South African and the local media to manufacture a non-existent crisis by churning unsubstantiated reports of a country that is in a crisis.

It is in this regard that the ANC team is expected to be debriefed by the Zanu PF team on the true picture obtaining in the country that include President Mnangagwa’s open door policy with all Zimbabweans and his re-engagements efforts that have been lauded world as panacea for bringing the country back to the community of nations.