Six. That is the number of times my lunch with Yvonne Chaka Chaka is interrupted. We’re sitting in a quaint corner at a restaurant on the Diamond Walk side of Sandton and behind this national treasure, who has just released her new album, Keep Looking At Me, is a towering Christmas tree next to a blazing fireplace.

We don’t need it, though – Chaka Chaka is warm enough. That’s the manner with which she handles each interruption.

Waiter after waiter after manager and more want to make sure they have paid attention to the Princess of Africa. But she has this effect on kids, too. Before the second interruption, Chaka Chaka is telling me about an incident she remembers.

“The other day I was walking eDube (in Soweto) to go and buy amagwinya (fat cakes) – I love amagwinya,” Chaka Chaka puts her hand on her chest. “So there were these kids on the street who see me and my friend walking and they start ” At this point, Chaka Chaka starts whistling gleefully.

“They’re whistling I’m In Love With A DJ,” she continues. “They must have been about 12 or 13 years old. I told them: you don’t know that song! That’s a song for your fathers,” she laughs. “They were teasing me, trying to show me: ‘We know you, magogo.’ But it was funny.”

Take a ride down the Trane tracks

Then: “Hi, papa,” Chaka Chaka shifts her focus but the smile is still the same as she greets yet another waiter. We finally order and I notice something about Chaka Chaka that I hadn’t before. She seems in genuinely high spirits.

Perhaps it’s the new album, maybe she is just full of festive cheer, but it felt like a reinvention of self, like she’s having as much fun now as she was when she first started with the smash hit, I’m In Love With A DJ, in 1985.

The singer-songwiter and UN goodwill ambassador has gone back to what used to be her signature short haircut – which is now accented by the greys adorning her crown. She wears classic white teardrop earrings and a pearl necklace. She has a vitality about her that makes it easy that the five years between her last album, Amazing Man (2012) and Keep Looking At Me (2017) have been good.

“In the 32 years I have been in the music industry, I really appreciate the time and space that I am in,” she smiles. “Amazing Man was obviously for Madiba and I’m glad I gave him a copy. He was smiling and he said,” she laughs before she puts on her best Nelson Mandela impersonation: “‘Ha! did you sing about me here? Oh, because I’m a pensioner?’”

This new album is jovial in parts (on Happy People and Dance Some More), reflective (on Letter To Grandmama – which is a merging of a collaboration and a cover) and socially conscious (on Jewel of Africa, featuring Berita, as well as Pardon Me).

“My music is encouraged by the things I see,” Chaka Chaka admits. “Whether I am in Uganda, Kenya, Vietnam or Japan, I still look and get inspired. The first track I did when I went into the studio was Pardon Me … There was a refugee child who washed up on the beach and I remember thinking: ‘Oh my God, this could be my grandchild. When you see those people standing there and preventing these (refugees) from coming in … I just cried.

“The words just came: ‘Pardon me, be my friend, don’t close the door.’ For me, it’s about peace, seeing the world being a better place and asking our leaders why should people die in this age and time? Why people should leave their homes to go across borders? It’s just so sad.”

In addition to the executive producer hat, Chaka Chaka also wears the songwriter and co-producer ones. In the “Thank You” notes, Chaka Chaka acknowledges her son, Themba “Maestro Mingz” Mhinga, for their fights and respects him as the producer. I ask her if there was a moment during the recording process that she realised he was right about something. She said: “It was (the case) with Keep Looking At Me,” Chaka Chaka points at the CD cover on the table and laughs. “I actually didn’t want to sing that song. He just said: ‘Mom, you’ve been around for a long time so let’s sing something that is light, funky …’

“You know, Pardon Me and Keep Looking At Me were done in London. The mixing and everything was really rocky and I kept sending it back, saying I don’t want it this way. He said: ‘You can’t close yourself into a box, mom.’ I wanted to keep me being me in the music but I listened to him.”

Aside from her biological kids, Chaka Chaka embraces her musical kids including Ali Kiba, who features on Akilia Mama, as well as Ntsiki Mazwai, who is on You and I Matter. “Ali Kiba is like one of my kids,” she tells me. “I like Berita – the same as Ntsiki (Mazwai). I take time to give myself to young people and see how I can help them navigate their own way. They say the ones who walk before you know the road and I listened and watched what Mam’ Miriam Makeba and Mam’ Dorothy Masuku were doing.”

She had this in mind when Berita approached her with Jewel of Africa, which specifically speaks of the self-esteem of young women. “When Berita came to me with the track, she sang it her way and I liked it. I said this is how I’m going to respond. I wanted us to make it so positive,” Chaka Chaka recalls. 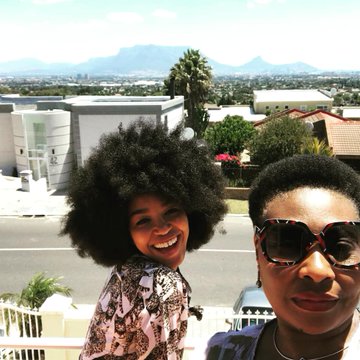 “I do all this work with the UN and I wanted us to sing for the whole of Africa. In South Africa what has become good,” she puts air quotes around the word good, “is a light-skinned girl. What about the dark girls? It’s about appreciating yourself and the fact that you’re an African girl.

“You must see yourself as a jewel because that’s what you are.”

As someone who entered the fiercely competitive music industry before her 20th birthday, I ask Chaka Chaka if she always knew that she was a jewel or if she had to work at it through the years. “If you look within you, the shine will come out,” she says matter-of-factly. “If you know who you are and have your feet firmly on the ground, you won’t lose that.

“When (record man) Phil Hollis gave me that R10 000 as an advance for signing a contract, she looked at that money and said: ‘I don’t want that money, let my girl go to school.’ Those are the values that I grew up with.”

But have those values made her a perfectionist. Before the muso has even answered, the shoulders of her manager Jenny Valsecchi, who has been sitting with us, shake with silent laughter. “I try,” Chaka Chaka says before she glances at Jenny and they both cackle.

“I’m my worst critic. I’m a producer and I pay for everything. I take charge. I’m not a negotiator because I feel like you know what you’re worth and I will pay you that. I think what has kept me steadfast is when everyone was going one way, I was going the other way. I believe in what I want and that’s just me.”

* Yvonne Chaka Chaka’s new album, Keep Looking At Me, is at physical and digital music stores.