(Reuters) – In the not-so-distant past, TV viewers were forced to wait a week for the next installment of their favorite shows, parceled out by networks in half-hour or hour-long increments.

Fast forward to 2019, when media and tech companies are subverting that schedule and the majority of viewers using U.S. TV streaming services watch an average of four hours of content in one sitting, according to Deloitte.

To understand how we got here, look at Netflix.

At the start of the decade, binge watching involved VHS tapes, DVD box sets or long nights glued to a DVR. TV cable hits included “Homeland” and “The Wire” – hour-long dramas with complicated plot lines that needed to be watched sequentially.

Watching “Saturday Night Live” on a Sunday became normal, and viewers started to lose track of the broadcast schedule.

In November 2010, Hulu, which debuted in 2008 as an ad-supported streaming video site, launched its subscription service, including full seasons of certain shows.

Around the same time that the broadcast TV schedule was losing its hold on viewers, Netflix was beginning to invest in original content. 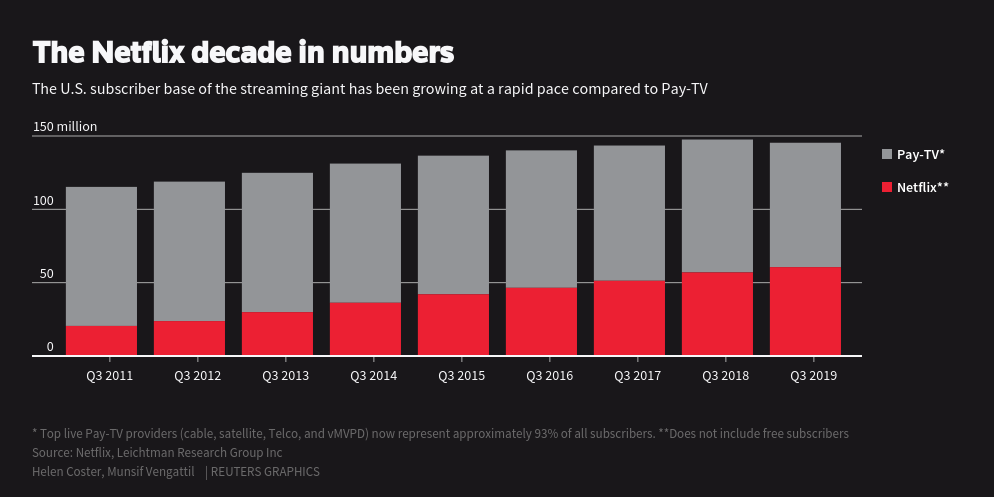 In 2011, it struck a deal for its first original show, the political thriller “House of Cards.” It released all 13 episodes of the show’s first season on Feb. 1, 2013. That July it followed with the entire first season of “Orange is the New Black.”

Viewers were hooked, and the cultural shift accelerated. “Binge-watch” was a runner-up to “selfie” for the Oxford Dictionary’s 2013 word of the year.

Netflix championed this new kind of consumption, commissioning a survey to determine how many people binge-watch, and why.

“Our viewing data shows that the majority of streamers would actually prefer to have a whole season of a show available to watch at their own pace,” said Netflix Chief Content Officer Ted Sarandos at the time.

While some say the decade technically ends a year from now, the end of this year will be marked by many as the conclusion of the second decade of the 21st century. And as the new decade begins, the trend may start to reverse.

AT&T’s forthcoming HBO Max streaming service will debut one new episode of its original series per week. Walt Disney Co’s Disney+ is releasing episodes weekly for new series including the Star Wars-related “The Mandalorian.” Apple released three episodes at the same time for dramas “The Morning Show” and “See” – and is doing so for most other Apple series – followed by one episode per week.

Media companies are hoping a longer release schedule will generate buzz and create more of a shared experience among viewers.