The 59-year-old singer can vividly recall reading a 1995 note from her former lover – who died in a drive-by shooting in Las Vegas in 1996 – after it was hand-delivered by a friend when he wrote the missive while behind bars.

In an affidavit filed at Manhattan Supreme Court and seen by the New York Daily News newspaper as part of a legal bid to prevent an auction house selling her personal items, including the letter, Madonna recalled: “I have a specific memory of receiving that letter because I had a close personal relationship with Tupac Shakur and I specifically remember receiving a phone call from him while he was in jail.

“My recollection is that he had one of his friends hand deliver the letter to my home in Manhattan.

“I also have a specific memory of reading the letter. In particular, I remember that he apologised to me. I never gave this letter away. It is intensely personal.”

However, in a deposition last month, Madonna’s former friend, Darlene Lutz, insisted she had been given the note as part of a pile of fan mail given to her by the ‘Hung Up’ hitmaker’s late manager, Caresse Henry, because the star didn’t “save, store, or archive” any of her letters.

Darlene told her ex-pal’s lawyer, Brendan O’Rourke: “You’re trying to distinguish between a personal letter or fan mail. And if you put two envelopes in front of you, one from a fan and one personal, and they looked exactly the same, what distinguishes that from fan mail. 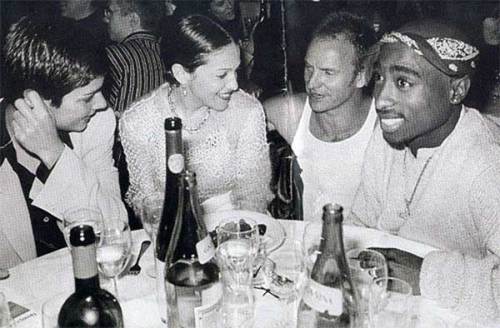 “The point is that Madonna didn’t handle her fan mail. She didn’t care.”

Darlene didn’t realise she had the letter until she began archiving items in her own apartment in 2008.

The lawyer asked: “When you finally read the Tupac letter in 2008 or 2009, did it not ring any alarm bells in your head that maybe it was not intended to be given to you?”

She replied: “I didn’t consider that.”

Details of Tupac’s letter were previously made public by TMZ, which showed the rapper felt race and their public images were factors behind their break-up.

He wrote: “For you to be seen with a black man wouldn’t in any way jeopardise your career, if anything it would make you seem that much more open and exciting.

“But for me at least in my previous perception I felt due to my ‘image’ I would be letting down half of the people who made me what I thought I was.
“I never meant to hurt you.”