In a statement released on his Twitter timeline, DJ Fresh has said he agreed to apologize unreservedly contrary to media reports. The host of Metro FM’s flagship ‘Fresh Breakfast’, was pulled off air a few weeks ago, following a verbal altercation with a listener on the show.

In the statement that was clearly released to clear up the air, it is explained that “after an incident where DJ Fresh’s unfortunate choice of words were said on air, the SABC had to act accordingly and unscheduled him off air for two weeks while the national broadcaster was investigating the matter with the BCCSA (Broadcasting Complaints Commission of South Africa) regarding the matter at hand.”
The statement further explains that Fresh was willing to apologize unreservedly: “A scheduled meeting between Fresh and the SABC occurred when the two weeks lapsed and Fresh agreed to apologize unreservedly”.
The impasse, according to the statement came about as a result of the request made by the SABC for DJ Fresh to remain off air for an additional three weeks, ending on July 15. The statement said that at the time of publication, Fresh was still awaiting confirmation about his return to work on July 15, and that the action of him being taken off air was punitive, with him having further lost his income for the duration of that period.
See the tweet below: 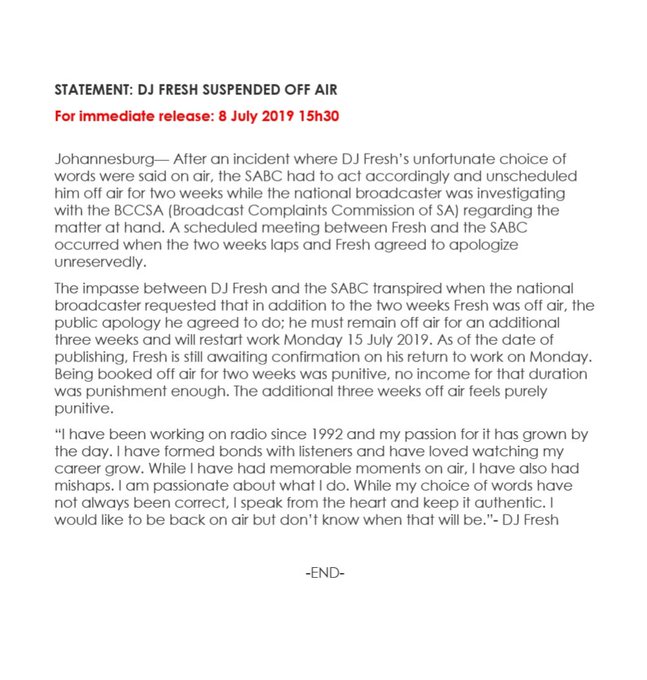 [STATEMENT] Contrary to the Disinformation being deliberately spread, I actually offered to apologize unreservedly…. TWO WEEKS AGO!!

Previous reports, based on an article in last week’s Sunday World, stated it’s unlikely that the ‘Fresh Breakfast’ will continue on the Metro FM as DJ Fresh refused to apologize.

The paper further alleged  that DJ Fresh’s lawyers told the SABC that the presenter will not apologize, demanding that he must be reinstated with immediate effect. To which, the SABC is alleged to have responded  to the lawyers and informing them that DJ Fresh would have to adhere to the conditions if he wanted to return to work.
According to the Sunday paper, DJ Fresh’s lawyers then hit back at the SABC stating: “Our client will not tender an apology and remain off work until 15th day of July 2019. As such, kindly confirm you intend terminating his contract.”
While confusion reigns supreme, here is what some tweeps have made of the situation:

The emotions I’m going through right now with this whole issue is just too much. Not sure how you’re holding @DJFreshSA but I hope gore o sharp wherever you are. Got nothing but love and respect for you good Sir. Stay strong

Its because u are so real that so many of us  u. It’s because u can laugh at urself, admit mistakes, build others up, put others first, change countless lives on a daily basis. My loyalty lies not with the station that u are on, but with u. Because u change my life, not them.

[STATEMENT] Contrary to the Disinformation being deliberately spread, I actually offered to apologize unreservedly…. TWO WEEKS AGO!!

For me there’s no apology to be accepted msunery is purely that. Anyway I have also punished Metro FM by moving to another station see you when Fresh is back yours truly #msunery

I only wish for you to end up where you’ll be valued and appreciated now.

An additional 3 weeks for what though? Seems very spiteful, senseless really. It’s a very “I’ll show you who’s boss” and “I don’t give a damn” attitude

With images of Fresh with Kaya FMs Greg Maloka having done the rounds as well, Mzansi waits with baited breath for the SABC to make its move and clear the air.