Comcast, though, said Thursday that it was still pursuing European pay-TV giant Sky PLC .Fox already owns 39% of Sky and is vying to consolidate ownership.

Comcast said it wouldn’t submit a new offer for Fox’s entertainment assets after its earlier $65 billion all-cash offer was topped by Disney, which bid $71.3 billion in cash and stock.

The cable giant’s withdrawal ends a high-stakes chess match among some of media’s most powerful players, as they position themselves for the decline of the U.S. pay TV industry and try to stock up on assets that could help them compete against streaming services like Netflix Inc.

Assuming Disney wins all necessary approvals—it already secured clearance from the U.S. Justice Department—it will wind up with assets including the Twentieth Century Fox film and TV studio, a controlling stake in streaming-video service Hulu, and international properties including Star India.

Last week, Comcast raised its offer for Sky to £14.75 a share, valuing the company at $34 billion. That is a 5% premium to an offer Fox announced earlier and 18% above Comcast’s first bid. Comcast said its latest offer was recommended by Sky’s independent directors.

Sky shares fell 2.7% to £14.90 a share in London trading. Investors had bid up shares expecting a bidding war that is now less certain. 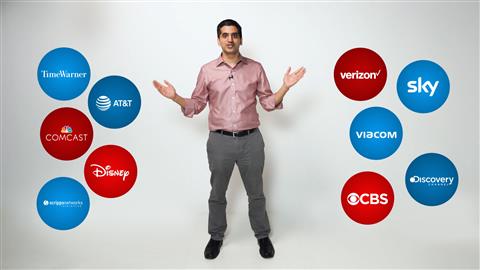 From AT&T and Time Warner to the hot pursuit of 21st Century Fox and Sky, media mergers are in full swing. Why now? WSJ’s Amol Sharma answers all your questions about the forces driving media deals. Photo: Getty Images

Disney Chief Executive Robert Iger has called Sky a crown jewel of his $71 billion pursuit of 21st Century Fox but will now have to decide how hard to fight for it, as some on Wall Street are arguing that the European television company isn’t key to Disney’s future.

The saga became a test of wills for the chief executives, a test of patience for shareholders as the bidding ratcheted up, and a forum to debate regulatory crosscurrents in media as a round of mergers challenge long-held antitrust theories.

“I’d like to congratulate Bob Iger and the team at Disney and commend the Murdoch family and Fox for creating such a desirable and respected company,” Comcast Chief Executive Brian Roberts said Thursday in prepared remarks.

Comcast had been pursuing the Fox assets since last fall. Fox struck a deal with Disney in December despite its substantially lower offer price, citing concerns about whether a tie-up with Comcast could pass muster in Washington.

Comcast felt its efforts weren’t taken seriously, people close to the company said. After months of plotting and planning, it eventually made another run at Fox with an unsolicited bid that was about 24% higher than Disney’s original offer.

When Disney came back with its latest offer, Comcast reviewed its options. The cable company considered raising money from private-equity investors or strategic suitors to finance a higher bid, people close to the company said. Comcast’s pursuit also hit a setback after the Justice Department said last week that it would appeal a federal judge’s decisionto bless a merger of AT&T Inc. and Time Warner Inc. Comcast had used the earlier ruling to rebut concerns from Fox that its bid would face regulatory risk.

In the end, Comcast chose to pull the plug on its takeover effort.

Comcast’s primary interest in the Fox assets was its international properties, since Comcast generates only a fraction of its revenue from markets outside the U.S., where the pay TV business is mature and under increasing stress from cord-cutting.

One person close to Comcast said recently that if the company didn’t wind up with the Fox assets, it would look at other paths for growth, including acquisitions in other areas of media or technology.

The outcome amounts to a major victory for Mr. Iger, who has gambled big on the Fox assets as he tries to steer the entertainment giant into a new era. Mr. Iger and Mr. Roberts have had a rivalry dating back to 2004, when Comcast unsuccessfully made a hostile acquisition run at Disney.

All the previous acquisitions during Mr. Iger’s tenure were substantially smaller than Fox, including Pixar Animation Studios, Marvel Entertainment and Lucasfilm. Comcast’s hostile bid for Fox and financial firepower forced Mr. Iger to up the ante.

Disney’s cable TV business has been buffeted by cord-cutting, especially sports network ESPN, which has long been a reliable profit engine but has lost millions of subscribers as people disconnect cable service or switch to slimmed-down packages.

Disney believes it can wring more value out of Fox’s movie and TV franchises such as “Avatar” and “The Simpsons,” and hopes Fox’s collections of assets will help it launch direct-to-consumer subscription services that can compete against Netflix, which has rapidly become a juggernaut.

For Mr. Murdoch, Fox’s executive chairman, sealing a deal with Disney will mean parting with a huge portion of the media empire he’s assembled over six decades. The Murdoch family, which has a 39% voting stake and 17% economic interest in Fox, has benefited from the bidding war, along with other Fox shareholders. The Murdoch family also have significant holdings in Wall Street Journal parent News Corp .

Mr. Murdoch isn’t selling everything. Fox News and Fox broadcast network are among the assets that are being spun off into a new news and sports-focused company the Murdoch family will continue to control.