MICHAEL Schumacher should be allowed to “live his life in peace”, one of his friends has pleaded, as mystery continues to surround the sporting legend’s health.

Schumacher’s health has been a closely guarded secret since he was seriously hurt in a skiing accident in 2013.

His friend Jean Todt, who is president of the motor sport governing body FIA, is one of the few people who has visited the seven-time world champion at his home following the accident.

He was also director of the Ferrari Formula 1 team from 1993 to 2007 and was one of the first to witness the successes of Schumacher, who won five consecutive world championships with the Scuderia.

When asked by Argentine daily newspaper La Nación for an update on Schumacher’s current health, Mr Todt said: “He is surrounded by his family, his affections.

“I feel blessed to have frequent access, but his health is a private issue and I think it’s time we let Michael live his life in peace.”

When pushed on whether Schumacher’s health is improving, Mr Todt stood firm, repeating: “I reiterate: it’s time we let Michael live his life in peace.”

On December 29, 2013, the sporting legend suffered a series brain injury after falling and hitting his head on a rock while skiing at the exclusive Meribel resort in the French Alps – despite wearing a helmet.

He was placed into a medically induced coma before undergoing two life-saving operations at the nearby Grenoble Hospital in southeastern France.

In April 2014, Michael Schumacher was withdrawn from the coma and moved to a hospital in Lausanne, a city on Lake Geneva in Switzerland, before being brought home in September of that year.

But Schumacher’s health has been shrouded in mystery since his accident, with millions of fans wondering what his current condition is.

Official updates from his family have been few and far between, who have continued to keep the matter strictly private and only allowing a close circle of friends to visit him.

In November, his wife Corinna Betsch told the press: “The decision to protect his privacy from the public has been taken in Michael’s interest.

“We have made it very clear that something serious has happened.”

Schumacher’s manager Sabine Kehm also insisted that his family were grateful for all the support from fans. 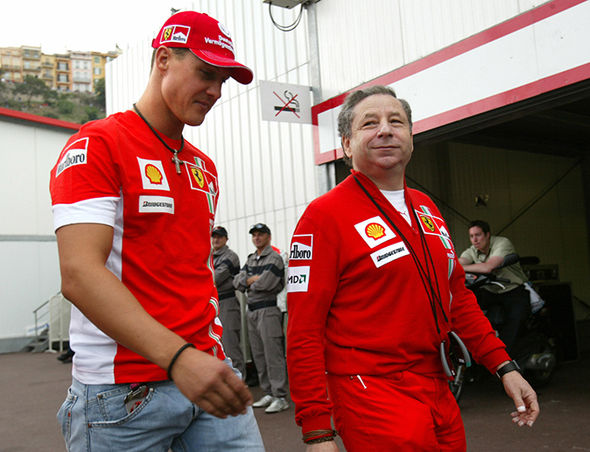 Jean Todt said Michael Schumacher should be allowed to “live his life in peace” (Image: GETTY)

She said: “What can be said is that the family really appreciates the empathy of the fans.

“The people really do see and understand (his health situation) is not to be shared in the public eye.”

Former Ferrari driver Luca Badoer, whose career in the sport overlapped Schumacher’s, revealed he visits him on a regular basis.

He told Italian outlet DiarioDelWeb: “The family wants to maintain a sort of secrecy about this and I respect their will. 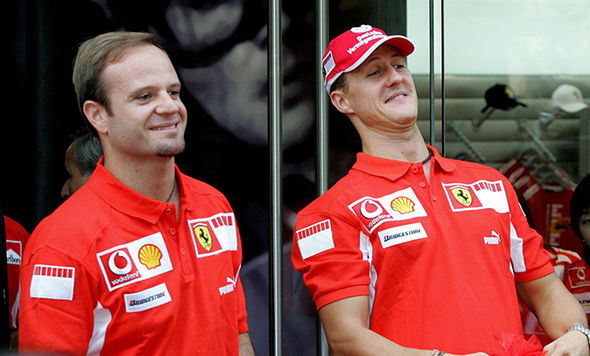 “They do all this for the good of Michael.

“I do not even want to talk about this, because I’ve never talked about it, just because the family does not want to.

“The visits to him are really granted to a few people, at the behest of Corinna [Schumacher’s wife].

“We respect what they want, and there is no need to make controversy.”

But in April, Schumacher’s former team-mate at Ferrari Rubens Barrichello revealed he was prevented from visiting the Formula 1 legend.

He told Brazilian TV network Globo: “I tried to find a way to visit him, but they said to me: ‘It will not do you or him any good’.