LONDON (Reuters) – World stocks have gained for sixth straight quarters to chalk up their best run since 1997, while a 20 percent rebound in oil has turned around one of its worst starts to a year on record.

It may just be the looming end of the great global easing experiment, but as this graphic shows, investors have spent another quarter piling into risk assets. 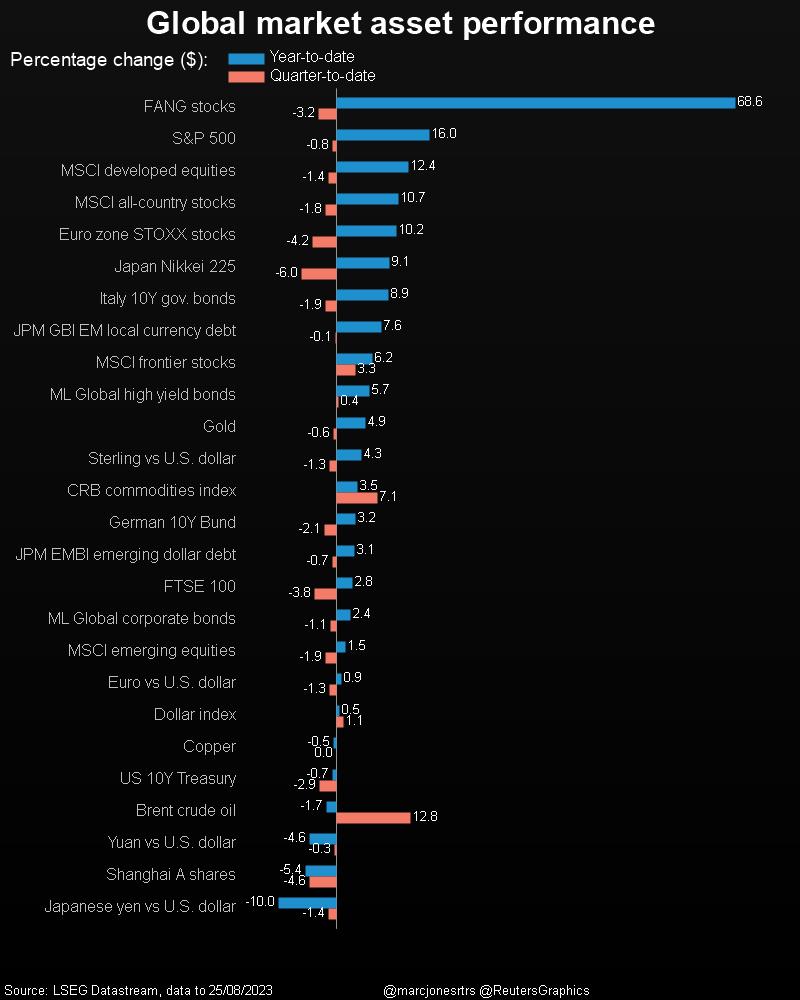 Emerging market stocks .MSCIEF have added almost 7 percent. Wall Street .SXP and MSCI’s 46-country world share index .WORLD have both risen 4 percent, with the latter on its longest run of gains since late 1997, when 11 rising quarters came to an end.

Debt from some of the world’s most politically strained countries has also rallied.

Analysts ascribe this to a mix of higher global growth, cheap and plentiful central bank liquidity, subdued inflation, and until the last few weeks, a weak dollar.

“The market moved already considerably in the first half of the year, so it has been a consolidation of the gains,” said ABN Amro chief investment officer Didier Duret.

“The last three months were a kind of intermediary zone, between the hopes (for stimulus) generated by the U.S. administration and the confirmation that we have a strong recovery globally.”

A standout change since the end of the first half has been in the price of oil. LCOc1

Crude was down 16.5 percent at the end of June, but its 20 percent rebound has hoisted it back into positive territory for the year. It has had its best quarter since the second quarter of 2016, marking its fifth quarterly gain of 20 percent or more in the last decade.

Those commodity gains have been helped, as this graphic shows, by the weak dollar, which is still down for the year against most world currencies.

The 2.4 percent quarterly fall in the dollar index .DXY has been a relative improvement, though. It has also regained ground against the euro, the yen, China’s yuan CNH=CNY= and Mexico’s peso MXN= in recent weeks. The latter remains the world’s second-best performer of 2017.

The euro EUR=, boosted by European Central Bank talk of winding down its more than 2 trillion-euro stimulus programme, is up more than 3 percent since the start of July and nearly 12 percent year-to-date.

Japan’s heavyweight Nikkei stock index .N225 has eked out a token 1 percent as the yen has stayed steady.

But emerging markets and the so-called FANGs – Facebook, Amazon, Netflix and Alphabet, or Google – again have made the eye-catching moves.

Brazilian stocks have recovered from the country’s latest political scandal to jump 20 percent in dollar terms. China is up over 13 percent and Russia has surged more than 14 percent, though it is still down for the year.

Britain may well be stuck in messy negotiations over quitting the European Union and an even messier domestic power struggle, but the pound has scored its third straight quarterly gain against the dollar and squeezed out a miniscule one against the euro.

At the bottom of the performance league table again is Greece. Its all-too-familiar worries have taken 14 percent off its stock market, although news in recent days that banks there will be spared another stress test, at least for now, has eased some of the pressure.