At last shareholders have the Old Mutual they hoped to own when it demutualised nearly 20 years ago.

The Old Mutual that moved its primary listing from London to Johannesburg on June 26 is a dominant, highly cash-generative business in SA and several other African markets, such as Namibia and Zimbabwe. In the six months to June it generated free surplus (the equivalent of free cash flow in a life business) of R3.47bn, or 62% of headline earnings.

CEO Peter Moyo says he is particularly pleased with the result in the rest of Africa, where earnings are up 30% to R478m.

There should be plenty of room for growth, as this amount represents less than 10% of operating profit, while at Standard Bank the Africa regions make up a third of earnings.

Peter Moyo: Particularly pleased with results from the rest of Africa, where earnings are up 30%. Picture: Freddy Mavunda

But Old Mutual will certainly tread softly, as it is unlikely that its shareholders trust it enough to do a transformative deal on the lines of Sanlam’s buyout of Morocco-based Saham Finances.

Of course, it might not need such a deal if it can get its West African bancassurance deal with Ecobank to work and what it calls “optimise staffing levels” in East Africa, or creating an avalanche of pink slips.

As many have believed, there is far more capital on the balance sheet than the group needs, and as well as a 45c interim dividend, there has been a special dividend of 100c, which Avior Capital Markets head of research Warwick Bam says came earlier than expected.

There will be more gifts for shareholders after the sale of the Latin American business goes through. Moyo says if the 32% of Nedbank that will be unbundled later this year is included, R46.8bn will have been distributed to shareholders.

It is not too surprising that legacy business Personal Finance, which is historically white, is struggling. Its profit fell by 34% to R918m.

“There was an increase in death claims and most of these were below the reinsurance limit — the point where reinsurers cover the claims,” says Moyo. “We could adjust our reinsurance levels, but we are in the business of taking risks ourselves.”

Personal Finance used to be as important as the Mass & Foundation Cluster (MFC), which has streaked ahead and accounts for almost a third of the group’s bottom line. It had very solid profit growth, off a high base, of 17% to R1.53bn.

MFC head Clarence Nethengwe says the business continues to sell risk and savings products about equally and, on top of its traditional worksite marketing, it has developed a branch network through Old Mutual Finance.

“If Capitec and African Bank want to take us on through their branches, we must be ready to compete with their core lending and transactional businesses,” he says.

For now, Nethengwe says he is very happy to continue to piggy-back his transactional product off the Bidvest Bank licence.

But if it gains scale Old Mutual will surely look to take full control, with its own licence.

Old Mutual Insure (previously Mutual & Federal) was the weakest business in the portfolio last year. But it produced a strong 6.4% underwriting margin in the six months to June, even without a full-time CEO, though it lost market share, with just a 3% increase in gross premium.

Stanlib analyst Louis Chetty says Old Mutual will still benefit from its relationship with Nedbank once its holding is down to 19.9%. “Moyo says he meets with Nedbank CEO Mike Brown at least twice a week, which is far more than previous Old Mutual top management ever did. And given that there is an arm’s-length commercial relationship, Old Mutual could even consider distributing all its Nedbank shares.” 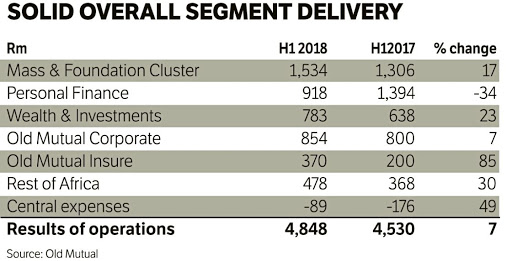 There was a substantial turnaround of cash flows into the Wealth & Investments business as the investment performance improved in unit trusts such as the Balanced and Flexible funds.

Truffle Asset Management portfolio manager Saul Miller points out that this unit has a high level of annuity income, with just pockets of nonrecurring income in its private equity and specialised finance areas.

Miller argues that Old Mutual could be the cheapest share in the Alsi 40.

The expected rerating of the share price after the relisting is unlikely. “[Old Mutual] certainly [has] enough to do, with restructuring in East Africa and increasing competition in core products such as umbrella funds and, through the disrupter banks, in funeral policies. It also has plenty of work to reposition its wealth and asset management businesses.”

Bam believes that Old Mutual in its present form has a similar growth outlook and capacity for special dividends to Sanlam, yet it trades at an unreasonable discount.