FOREIGN AFFAIRS Minister Sibusiso Moyo has urged Zimbabweans based outside the country to consider applying for jobs advertised locally so that they could come in with their wealth of expertise acquired from outside.

He was addressing local youths at a Friday Global Sharpers organised event dubbed, the ‘Road to Davos 2020’.

In his remarks, Moyo said the diaspora community remained very important in building the country, particularly through their remittances.

He added Zimbabweans based abroad could also bring back their skills and experience in efforts to rebuild their troubled country.

“It has been a policy that when His Excellency (President Emmerson Mnangagwa) travels or I do in every country, we have seen that in the Diaspora, we have lots of skills, which are embedded,” said the one-time celebrity top soldier, famed for his brave announcement of former President Robert Mugabe’s popular overthrow November 2017.

“We have seen there are financial savings, opportunities and networking of finances which they have which they can actually deploy back home in business and rebuild the country.

“And in diaspora, you can actually see there is a lot of commitment.”

Moyo added: “We have established a Diasporas Department and we are working together with the International Organisation of Migration (IOM) in correcting relevant information about our people.

“We are working with the Public Service Commission and also with the other organisations in advertising our activities on our system so that we can populate that internationally.

“And then we can then get applications coming in so that we can get our people to deploy their skills in that matter.

“We are also using Zimbabwe Investment and Development Agency, we expect that a lot of our people will express opportunities not only as business people but also be the management part of some of these organisations coming to invest in country.”

Moyo’s invitation to millions of Zimbabweans who fled the country’s dire political and economic situation since the turn of the century would most likely be received with disdain by his compatriots who have watched from outside, how their country has been wrecked by a combination of corruption and incompetence by the Zanu PF led administration.

The country’s top ambassador got a taste of the anger that Zimbabweans based outside have towards their country’s rulers when he was mobbed and harassed just as he exited Chatham House, in London July last year.

Moyo was in England leading a Zimbabwean delegation on a four-day re-engagement programme to strengthen bilateral relations and to woo investment for Zimbabwe.

His visit coincided with the period the new Mnangagwa administration escalated its bid for readmission into the Commonwealth.

When he left Chatham House (watch video below), a group of Zimbabwean protesters charged at the minister and his security detail. 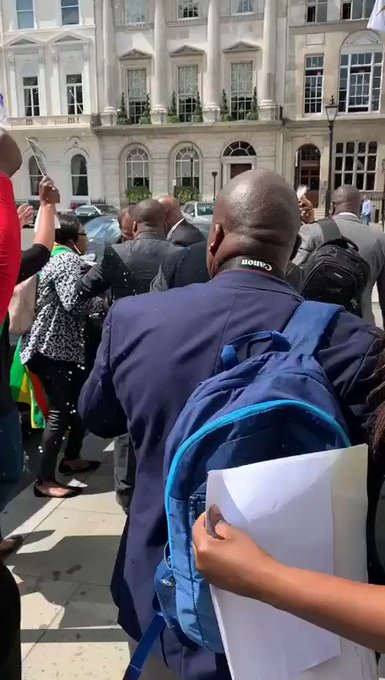 One of the protesters managed to spray the minister with water from a bottle as he attempted to get into his designated vehicle.

At that point, the minister was whisked away in another vehicle.

Apart from the jobs that Moyo wants Zimbabweans based outside to apply for, the country’s rulers are already under fire from the government workforce for paying them a pittance.

Many professionals and ordinary Zimbabweans are scrambling for scarce passports to leave the country at the earliest possible opportunities.