Mnangagwa, who took the top job in November following Mugabe’s dramatic resignation, said his priority now was embracing the international economy and modernizing infrastructure, in an interview with CNN’s Richard Quest at the World Economic Forum in Davos on Wednesday.
Mnangagwa pledged “zero tolerance on corruption” and said he was “doing everything possible to deal with our debts.”
Asked whether people could trust the word of a man who worked closely with Mugabe for more than five decades, Mnangagwa said, “Those who want to live in the past can continue to live in the past. But those who want to see the future, where we are going, can look at what we are doing.”

Striking a conciliatory tone on his relationship with Mugabe, Mnangagwa did not rule out the previous leader’s family having a role in the future of Zimbabwe. 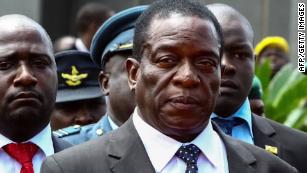 “The family, the children, are citizens of Zimbabwe and they have every right like any other citizen,” he said. “If they commit any crime or any corruption they will be dealt with.”
Mugabe’s firing of then-vice president Mnangagwa in early November, in an apparent attempt to clear a path for his wife Grace to succeed him, set in motion a military takeover and ultimately the president’s resignation.
Mnangagwa said Zimbabweans will have “fair and free” elections when they next go to the polls later this year.
Unlike his predecessor, Mnangagwa said independent international monitors would be present.

The president also said compensation would be paid for developments on property seized by the government in controversial land reforms. However, he added, “we will not pay anything on the land itself.”
Under Mugabe’s program of land reform, forced land seizures from white farmers resulted in serious economic and social consequences. Large-scale commercial agriculture — the backbone of the country’s economy — was replaced by subsistence farming, hyper-inflation set in and, later, the country was forced to dump its currency and adopt the US dollar.
“We don’t regret the actions we took,” Mnangagwa told CNN, adding that violence was used in “some instances.”
“We fought a war of liberation for more than 15 years to regain our land — it was a situation where 1% of the population owned 75% of the land.”

Same-sex marriage is banned in Zimbabwe, and that doesn’t appear to be changing any time soon under Mnangagwa’s leadership.
“Those people who want it are the people who should canvass for it, but it’s not my duty to campaign for this,” he said.
“In our constitution it is banned — and it is my duty to obey my constitution.”

Can Mnangagwa deliver a new-look economy?

Mugabe’s resignation marked the end of an era in Zimbabwe. The 93-year-old ruled the country with an iron fist for 37 years and was the only leader the nation has known since it achieved independence from Britain in 1980. 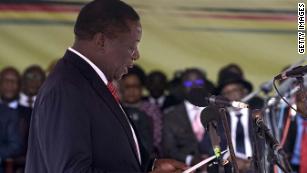 Zimbabwe’s Mnangagwa sworn in as President 01:26
Zimbabwe was once the breadbasket of Africa, but under Mugabe’s policies the economy was left in ruins. Zimbabweans have suffered under industrial mismanagement, food shortages, a collapsed currency and widespread corruption.
Corruption is a subject close to the hearts of the people, who had watched Mugabe live an extravagant lifestyle for decades as the country struggled with food shortages and poverty.
But with Mnanagagwa accused of orchestrating some of Mugabe’s most ruthless policies and actions, there is a sense of nervousness that he could follow the former leader’s use of fear to keep his grip on power.

Who is the man they call ‘The Crocodile?’

Mnangagwa is known as “The Crocodile” for his political cunning and longevity and is among the country’s combat-hardened veterans of the struggle for liberation from white-minority rule. 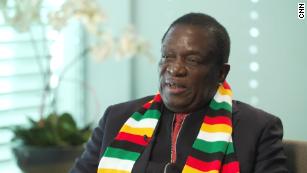 Who is Emmerson Mnangagwa? 01:25
His background and experience are almost entirely hitched to Mugabe’s career. He was Mugabe’s closest aide for much of his career and presided over some of the leader’s most ruthless actions.
Mnangagwa was the country’s spy chief in the 1980s when a campaign of terror was unleashed by the North Korean-trained Fifth Brigade against political opponents and civilians, in which thousands were killed. Mnangagwa has denied involvement and blamed the army.
He is at the center of Zimbabwe’s cluster of power, with strong backing from the country’s elite and the military, but it is unclear whether he will be able to win the hearts of the people and be victorious in an election.