Douglas Rogers tells the story of the 2017 coup-that-wasn’t in an enthralling read, but there are flaws.

The toppling of an autocrat generally makes for enthralling reading. Two Weeks in November obliges in many respects.

Keeping readers on tenterhooks and delivering on its promise to reveal, in thrilling fashion, “the astonishing untold story” of the 2017 coup-that-wasn’t in Zimbabwe, Douglas Rogers uncovers how a small group of plotters finally threw off the country’s authoritarian, nonagenarian yoke of president Robert Mugabe.

Other credible principals include human rights lawyer and chair of the Zimbabwe Exiles Forum Gabriel Shumba and Christopher Mutsvangwa, chair of the war veterans’ association.

The veterans were outraged by Grace Mugabe’s power play:  leading the Group of 40 (G40) faction, she scornfully dismissed the ageing fighters, who in turn baulked at the idea of her as Zanu-PF leader and the country’s new president. 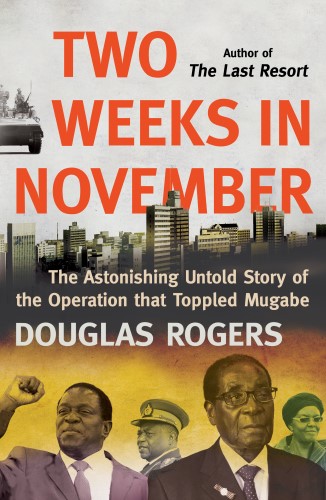 Less credible is the idea that an exile, Tom Ellis, would co-ordinate and drive the impetus behind then vice-president Emmerson Mnangagwa, facilitating crucial connections between sworn enemies on opposite sides of Zimbabwe’s political spectrum, including state security operatives of the Central Intelligence Organisation (CIO).

Rogers posits Ellis as the initiator and lead strategist, a benevolent Steve Bannon running a long game from a downbeat sports bar in Randburg. It’s not entirely implausible, but Ellis is a cash-strapped builder, not a high-powered global businessman, and it seems an imaginative stretch that he is able to penetrate the CIO and turn agents initially sent to assassinate him.

Stereotypical spy games unfold, featuring men codenamed Kasper, Magic and Horse. Men bond as the drinks flow, and the action and bravado notch up in Boy’s Own-style, building the story to an exciting crescendo, but deflating in its dislocation from more likely truths. Occam’s razor — the principle that the least speculative, complex explanation is usually the correct one — makes one think that Rogers has overplayed the drama and exaggerated or fabricated detail for the sake of a rollicking gambol.

The other key flaw is a near total absence of agency credited to Mnangagwa. “The Crocodile” is portrayed as a pawn of the kingmakers and an assassination target for the G40, and his involvement in the saga is limited to flee-and-return cross-border escapades, carrying a $8,000 Luis Vuitton briefcase the contents of which we never learn.

The plot revs full-throttle during the second week of November. The Boksburg Holiday Inn is taken over as a command centre: “The lobby, restaurant and garden area now turned into a vast open-plan office, two dozen men and women on cellphones, huddled in conversation, poring over documents.” It’s difficult to believe the overthrow of a neighbouring government head, and fellow liberation hero, could be performed in plain sight. What must the waitresses and pool attendants have thought?

Rogers delivers zesty slivers of humour, reflecting Zimbabweans’ acerbic wit, a coping mechanism through the years. When he and three white friends participate in the mass march on November 18 in Harare, they’re greeted with “You will get your land back now!”

He quips about the arrival of the international press, interest piqued for the first time since 2015 when Cecil the lion was shot by an American dentist: “Last time it was for a lion, this time for a crocodile.”

Descriptions of Mugabe’s appearance on live television on Sunday November 19 and his non-resignation resignation speech are intriguing. Rogers credits Ray Ndlovu’s authoritative In the Jaws of the Crocodile for specifics; the combination of near-slapstick bungling, non-verbal cues, calm and discord both on- and off-camera, makes for riveting reading. “We don’t watch Game of Thrones. We live it,” he quotes a friend.

Rogers punts the denouement as “the most precise, ruthless and sophisticated single-day military operation in African history — Zimbabwe’s “Zero Dark Thirty or Raid on Entebbe.” The book’s entertainment value excuses the hyperbole, but it only partly convinces.

Perhaps the most extraordinary aspect of the coup is that there was no loss of life; the most dismaying is that Mnangagwa has proved to be cut from the same cloth as Mugabe. Nearly two years on there is no end in sight to the country’s plight, and Zimbabweans may be forgiven for wondering if any of it meant anything.

This article was first published here by the Financial Mail